3Ministry of Environment and Climate Affairs, Ruwi, Sultanate of Oman

Telemetry studies of loggerhead turtles in the Sultanate of Oman were initiated in 2006. To date, the only study site has been Masirah Island, approximately 13km off the mainland in the Arabian Sea (Figure 1). Masirah has been noted as one of the most important rookeries in the world for nesting loggerhead (Caretta caretta) turtles with initial estimates of 20-40,000 females nesting per year on approximately 80km of beach (Ross & Barawani, 1995; Baldwin et al., 2003). In 2015, the IUCN review of loggerheads classified the nesting population in the North West Indian Ocean as Critically Endangered based on historical and recent nesting trend data (Casale, 2015).

Two separate research programmes have undertaken tagging of nesting females on Masirah. The Masirah Turtle Conservation Project (MTCP), comprised of the Oman Ministry of Environment and Climate Affairs, the Marine Turtle Research Group, UK, and Biodiversity East, deployed ten tags in May 2006 with funding from Total Foundation. The second group, the Masirah Conservation Project (MCP), a partnership between the Oman Ministry of Environment and Climate Affairs, US Fish and Wildlife Service, National Marine Fisheries Service and Florida Fish and Wildlife Commission, deployed their first tags in August 2006. Between 2010-2016, this latter group expanded to include the Environment Society of Oman, Five Oceans Environmental Services, NOAA’s Southwest Fisheries Science Center, Ocean Ecology Network, and Mote Marine Laboratory with funding support from US Fish and Wildlife Service and the US Department of Interior. To date this partnership has deployed a total of 73 transmitters (Table 1).

The primary objectives of both groups have been to evaluate inter- and post-nesting movements of females and to determine nesting/clutch frequency. For the second group, the telemetry work has also been part of a broader study of sea turtle ecology on the island that resulted in detection of a nesting decline since initial nest monitoring work was initiated in the late 1970’s. The early evidence of population decline, together with the outcomes of community consultation, resulted in the expansion of project research objectives to also include an evaluation of the impact of coastal artisanal fisheries on Masirah’s loggerheads. To meet these objectives, platform terminal transmitters have also been instrumented with FastlocGPS and pressure sensor instrumentation to provide fine scale tracking and dive profile information (Table 1). 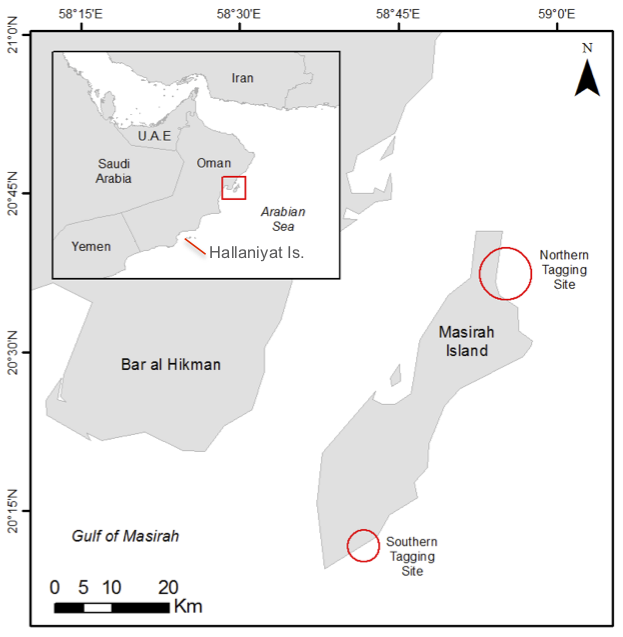 Figure 1. Location of the Hallaniyat Islands and northern and southern tagging sites on Masirah Island.

Rees et al. (2010; see also Rees et al., 2018) reported on the behavioural plasticity of the turtles tagged in the first study group. Six of the tracked turtles stayed close to the island during the interesting period whilst four others undertook ‘circuitous loops’ of hundreds of kilometres away from the island. Multi-parameter assessment of telemetry data from the interesting period revealed an average nesting frequency of 4.8±1.2 (SD) nests per season (n=8), Post nesting turtles predominantly moved south as far as Yemen spending 76±15.4% time in oceanic habitat (n=8). Six turtles are described to have undertaken 6 large-scale oceanic loops between the mainland and Socotra Island. One turtle, tracked for 22 months, exhibited a 1-year remigration interval back to Masirah and re-migration to waters off Yemen. Post nesting telemetry data further revealed a polymodal foraging strategy where females moved between neritic and offshore oceanic habitats over a spatial range of 400 to 1400km (Rees et al., 2010).

More recently, Tucker et al. (2018) provided a revised estimate of mean clutch frequency of 5.4 nests per female annually (SD=0.87, Range of 4-7 nests, n=34) from satellite tags deployed on early season nesters. With the noted dramatic decline of this population, further work to identify sources of mortality remains high on the research agenda. Additional analyses and publication of sea turtle tracking results, by the second group (MCP), are currently in process, and fisheries research has continued with the deployment of GPS tracking devices on fishing vessels with the aim of generating more robust fishing effort density maps.

This work has been made possible by the support of the Ministry of Environment and Climate Affairs ranger team, and the Environment Society of Oman field team based on Masirah Island (Ghasi Al Farsi, Juma Al Araimy and Juma Al Humaidi). The Environment Society of Oman management team (Lamees Daar, Suaad Al Harthi, Asma Al Bulushi) facilitated field and logistic work. Other team members of Five Oceans Environmental Services (Elayne Looker) are to be thanked for their field effort and availability. Nick Pilcher, Blair Witherington and Tony Tucker are to be thanked for their role in supporting the deployment of tags together with Barbara Schroeder of NOAA who guided purchase, configuration and hosting of telemetry data. The project has been mainly financed by Total Foundation, US Fish and Wildlife Service and the US Department of Interior.