1Centre for Ecology and Conservation, University of Exeter, Cornwall, UK

Five species of sea turtle have been identified in Kuwait. Hawksbills (Eretmochelys imbricata) are the most common, nesting in three principal locations: Qaru and Umm Al-Maradim (UAM) islands and Ras Al Zour (RAZ) on the mainland (Figure 1). Annual nest numbers at each location are in the low tens of nests (Papathanasopoulou, unpubl. data (Qaru and UAM); Deemer, pers. comm., 2012 (RAZ)). Until recently (2005), green turtles (Chelonia mydas) also nested on both these islands, but have been restricted to Qaru since then, after an extended Coast Guard station, customs facility and harbour were constructed on UAM (Al- Mohanna et al., 2014). The annual number of nesting turtles between 2008 and 2016 has ranged from 0 to 5 (Rees et al., 2013a; Papathanasopoulou, unpubl. data). Less-common, non-breeding species present are the olive ridley (Lepidochelys olivacea; Bishop et al., 1997), the loggerhead (Caretta caretta; Al-Mohanna & Meakins, 2000a) and the leatherback (Dermochelys coriacea; Al-Mohanna & Meakins, 2000b) turtle.

To aid sea turtle conservation and management and raise awareness of their plight, between 2009 and 2013, we undertook a tracking study to determine foraging locations and migratory routes of adult turtles encountered in Kuwait. 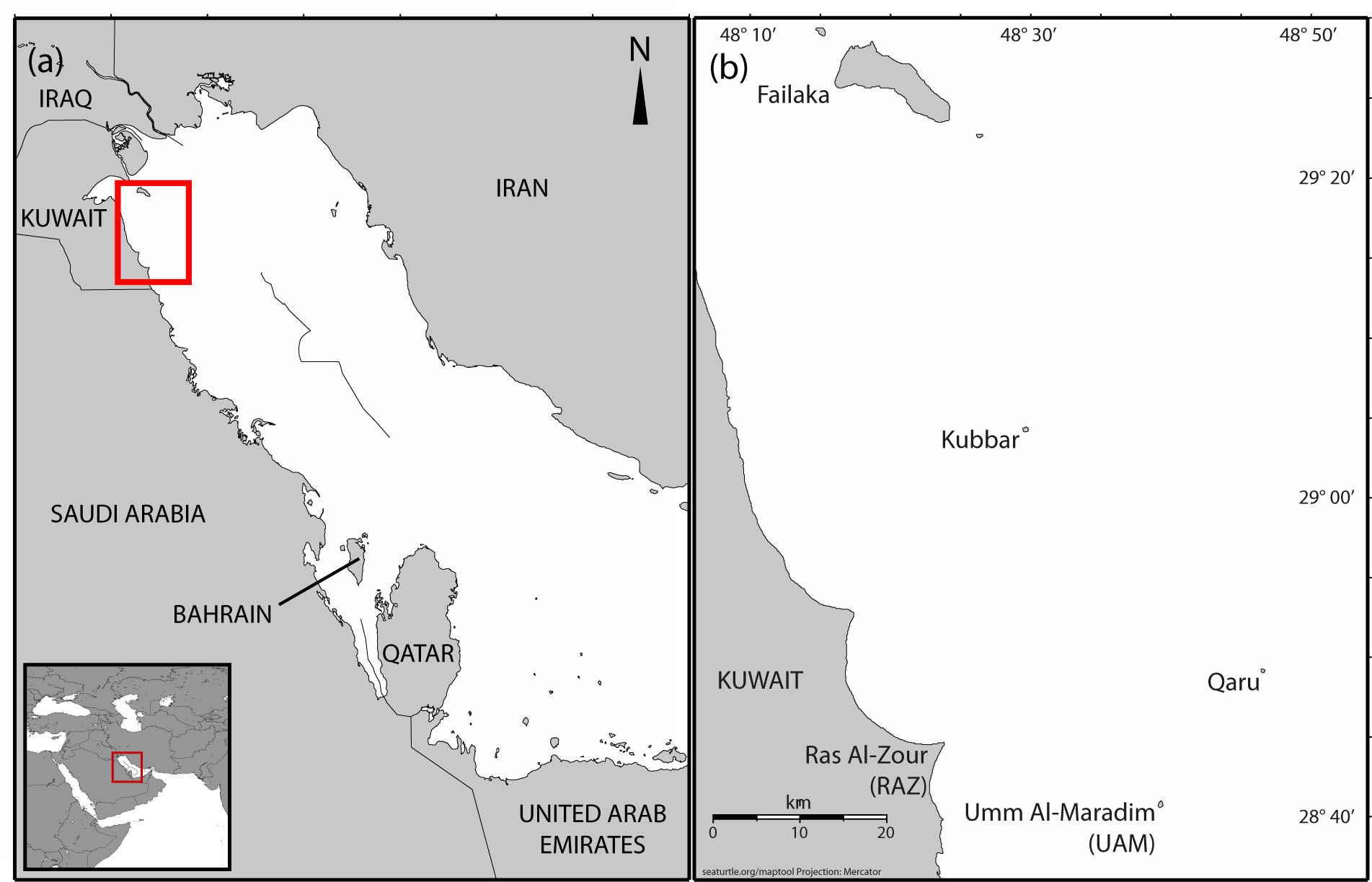 Figure 1. Kuwait in a regional setting. a) Map of region showing Kuwait’s neighbouring countries. b) Kuwait’s Islands and other locations mentioned in the text.

To date, 10 Kiwisat Argos satellite transmitters (www. sirtrack.com) have been deployed on turtles in Kuwait (see Table 1. A – J). Six were applied to post-nesting females, and four to rescued turtles. Of the six, four tags were placed on nesting hawksbill turtles in 2010 (two at UAM (A & B) and two at Qaru (C & D)); and two tags were placed on nesting green turtles at Qaru, the first in 2009 (E) and the second in 2010 (F). The other four tags were placed on adult-sized, rescued female green turtles: two in 2010 (G & H) and two in 2013 (I & J). The first two rescued turtles were recovered from power-plant water intakes on the mainland at Fahaheel, and the second two from inside fish traps (hadra) – a passive fishing gear that indiscriminately captures marine life – on the coast of Failaka Island.

The four nesting hawksbills remained within approximately 150km of their nesting areas (Table 1), mainly within Kuwaiti waters, but two (B & C) migrated into Saudi Arabian territorial waters (Rees, In Prep.)

Only one of the two tagged nesting green turtles (F) provided any useful data, remaining to nest at Qaru island one more time before migrating approximately 105km south into shallow coastal waters in Saudi Arabia (Figure 2a, Rees et al., 2013a).

All four rescued green turtles migrated to the coast of Failaka Island (Figure 2b). The two rescued green turtles from 2010 (Table 1; G & H)) were released at Kubbar Island and migrated to Failaka Island where they remained for the duration of their tag life span, although one (H) undertook a looping winter migration (Figure 2a, Rees et al., 2013). The two green turtles from 2013 (Table 1) were released on the mainland coast and both also migrated to Failaka Island. One (I) spent the majority of its 371 day tag’s lifespan there, except for a two-month, 350km loop south into Saudi Arabian waters during winter (Figure 2a). The other (J), after 68 days, migrated approximately 710km southeast and became resident in UAE waters east of Qatar approximately 620km from the island (Figure 2c).

The one green turtle (J) that migrated south to the UAE passed the Gulf ’s main green turtle nesting areas of Karan and Jana Islands in Saudi Arabia (Pilcher, 2000), hence it is possible that she may belong to this nesting population rather than the remnant population nesting in Kuwait.

Behaviour of hawksbill turtles nesting on Qaru and UAM have, with small sample sizes, been explored and have generated data broadly in-line with the findings of similar work carried out further east in the Gulf (Pilcher et al., 2014). However, the movements and behaviour of hawksbills nesting at the mainland site of RAZ remain unstudied.

All 10 tags deployed to date were placed on adult or adult-sized female turtles. There is almost a complete lack of data on adult male turtle migrations and residency in Kuwait, the exception is the recurrence over 14 years of an adult male hawksbill at Qaru Island, determined through Photo Identification (Rees et al., 2013b).

Furthermore, no juvenile turtles of any species of sea turtle found in Kuwait’s waters have yet been tracked. It is not known if adults and juveniles share the same foraging locations in Kuwait, so it is not yet possible to define multi-age-class Important Turtle Areas. Without complete turtle distribution data, robust spatial planning for marine protected areas is difficult to achieve.

• Deploy satellite tags on several hawksbills nesting at RAZ to determine foraging areas and post-nesting migratory behaviour for this nesting aggregation together with further tags on the insular nesting hawksbills to increase sample size.

• Attempt to deploy satellite tags on adult male hawksbill and green turtles located near to the nesting beaches to determine their residency and post-breeding migrations.

• Acquire further information on juvenile turtle distribution from ‘third party’ observers, e.g. fishers, snorkelers, SCUBA divers and other sea-goers, to identify areas that would warrant investigation before any potential satellite tracking research is undertaken on this life-stage.