WHERE DO THEY GO? SATELLITE TRACKING OF NESTING TURTLES IN SRI LANKA

To date, two satellite telemetry studies on turtles have been conducted in Sri Lanka. The first involved a collaboration between the Marine Conservation Society (MCS), the Turtle Conservation Project, and the Government’s Department of Wildlife Conservation (DWC) (Richardson et al., 2013). This study deployed satellite tags on ten nesting green turtles at the Rekawa Sanctuary, near Tangalle on the south coast, in 2006 and 2007.

The second study was a collaboration between the Wildlife Institute of India (WII) and DWC in 2010, and deployed satellite tags on four nesting olive ridley turtles and one nesting green turtle at Bundala, Rekawa, and Kosgoda turtle rookeries on the south and west coasts (Sivakumar et al., 2010). This study is yet to be fully published, and therefore this review only summarises the project tracking data as described in Sivakumar et al. (2010).

Richardson et al. (2013) aimed to identify inter-nesting habitat, migration corridors and residence locations of a population of green turtles nesting within the Rekawa Sanctuary, the largest green turtle rookery on the southern coast of Sri Lanka (Figure 1). Sirtrack Kiwisat 101 satellite transmitters were attached to adult female green turtles (Table 1) after they had nested on Rekawa beach in July and August 2006 (n=6), and June 2007 (n=4), and the turtles’ subsequent movements were tracked and mapped by STAT (Coyne & Godley, 2005). The turtles exhibited behavioural plasticity within the population. 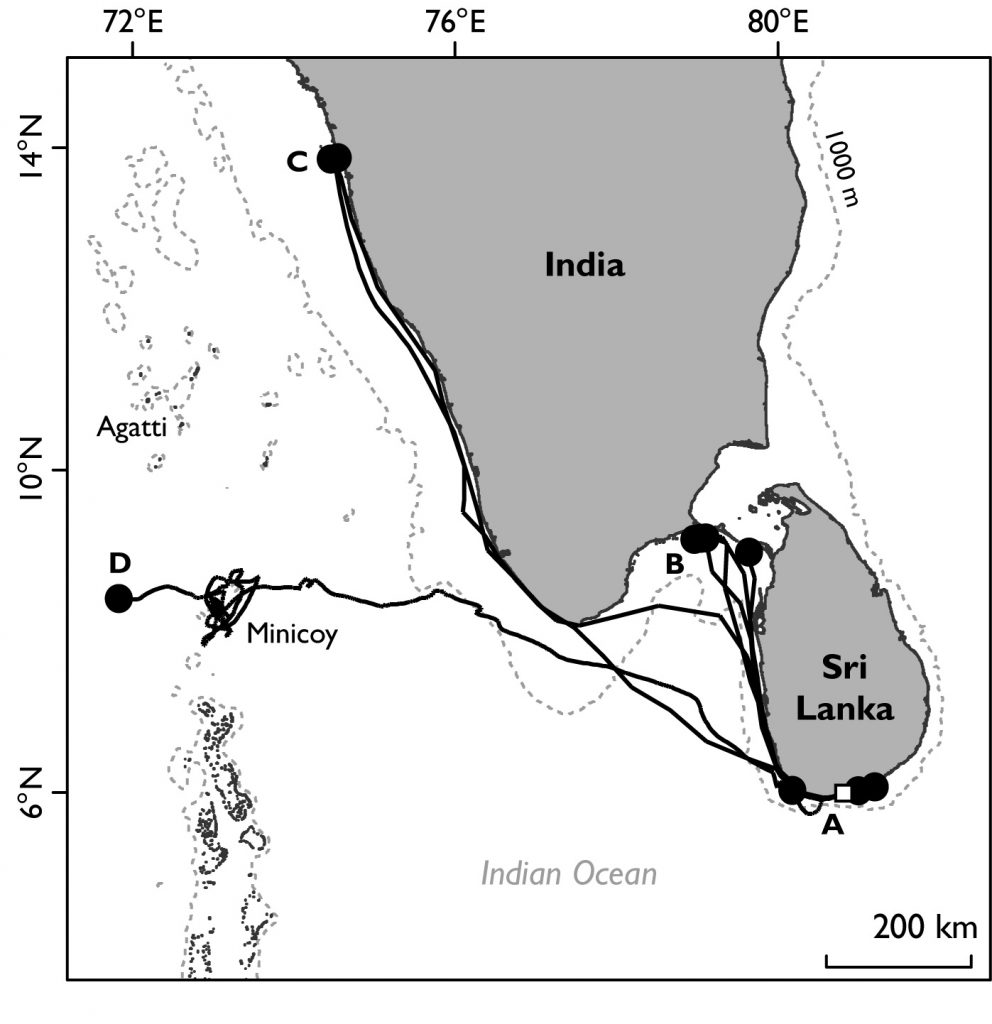 While one green turtle started its post-nesting migration immediately after tagging, six turtles spent their inter-nesting periods proximate to Rekawa beach before nesting again at Rekawa (Figure 2). The other three turtles repeatedly travelled to respective and separate coastal locations at Usangoda, Bundala, and Habbaraduwa, all within 60km distance from Rekawa, to spend their inter-nesting periods before returning to Rekawa to lay subsequent clutches (Figure 2). 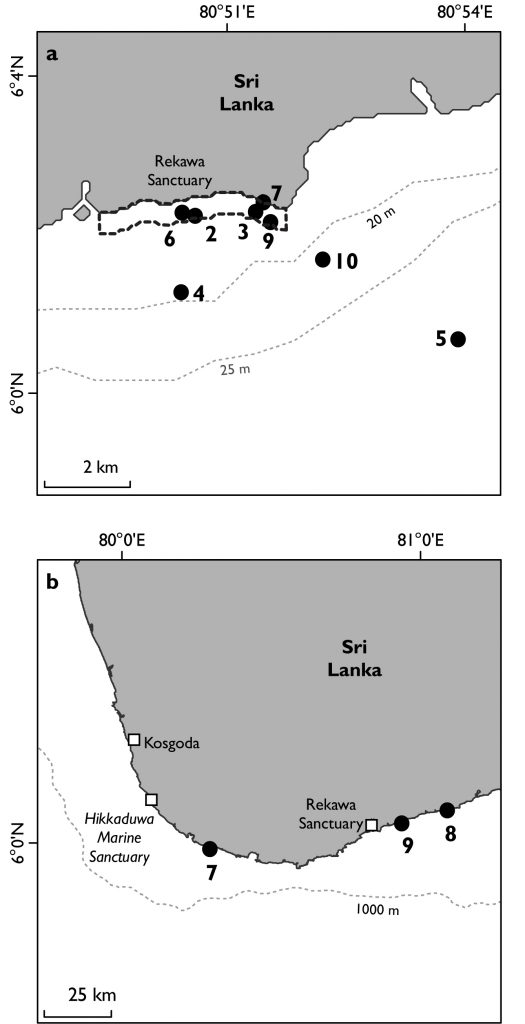 Figure 2. Inter-nesting centroids calculated for the nine turtles that nested at Rekawa after they were fitted with a satellite tag (numbers represent turtles in Table 1) in the study by Richardson et al. (2013), a, for turtles remaining proximate to Rekawa Sanctuary, b, inter-nesting and foraging site centroids calculated for the resident breeder turtles identified in this study.

After laying their last clutch of eggs at Rekawa, the green turtles exhibited multiple migration patterns as described by Godley et al. (2008) (Figure 1). The turtles that spent inter-nesting periods at the coastal locations away from Rekawa returned to their respective inter-nesting sites, where they remained until transmissions ceased. This relatively proximate residence to the nesting beach of these ‘resident breeders’ is described as movement pattern A3 by Godley et al. (2008).

The other green turtles exhibited two other movement patterns. Six turtles migrated away from Rekawa once they had laid their last clutch of eggs, travelling northwards in coastal waters, and corresponding with movement pattern A1 described by Godley et al. (2008) (Figure 1). Two of these turtles eventually settled at a site close to Shirali Island in coastal waters of Karnataka, India. Four of these turtles settled at sites in the Gulf of Mannar, with three of these turtles settling in the Gulf of Mannar National Park off the coast of Tamil Nadu. It is interesting to note that the only green turtle in the Sivakumar et al. (2010) study, tagged after nesting at Bundala in February 2010, also exhibited this movement pattern and also finally settled in the Gulf of Mannar National Park.

One green turtle exhibited movement pattern B described by Godley et al. (2008) when it migrated away from Sri Lanka through pelagic waters and travelled to Minicoy Atoll in the Lakshwadeep Islands (Figure 1). The turtle remained close to Minicoy for 39 days, constantly performing looping movements around the atoll, and up to 65km distance before returning back to the atoll. The tags transmissions ceased when the turtle was 135km away from Minicoy, after having travelled due west from the atoll for 3 days, perhaps migrating into the Arabian Sea.

Sivakumar et al. (2010) describe the tracks of four female olive ridley turtles tagged after nesting in February 2010, and up to the 30th of June 2010 when the tags were still transmitting (tag make not specified). Two turtles were tagged at Bundala, one tagged at Kosgoda and one tagged at Rekawa. After nesting, two of these turtles (tagged in Bundala and Kosgoda) travelled to open oceanic habitats to the south west of Sri Lanka and were there in June 2010. One turtle (tagged in Bundala) migrated north-west to the Gulf of Mannar Park, where it appeared to settle in April 2010, and was still there in June 2010. The other turtle (tagged in Rekawa) travelled westwards to the Maldives, arriving in April 2010, before heading north and settling offshore of Kerala, India in May 2010. It was still there in June 2010.

The findings of these studies highlight the disparate nature of habitats that nesting green and olive ridley turtle populations in Sri Lanka depend on. The Rekawa green turtle population uses inter-nesting habitat proximate to Rekawa, as well as other inshore sites along Sri Lanka’s southern coast. These sites also serve as resident foraging habitat for these turtles. The population uses important migration routes through the coastal waters of India and Sri Lanka, and some turtles share foraging sites far away from Sri Lanka in India’s waters. Coastal fisheries incur turtle bycatch in both India and Sri Lanka (Kapurusinghe, 2006; Rajagopalan, 2006) and, therefore, more research is required to determine whether or not this bycatch poses a significant threat to Sri Lanka’s nesting turtle populations. The study also highlighted the importance of protecting key foraging habitat for marine turtles, with the rich habitats in the Gulf of Mannar National Park being of particular significance to Sri Lanka’s green turtle nesting population, and possibly olive ridley turtle populations. It is also of interest to note that Sri Lanka and the Lakshwadeep Islands share a green turtle population, and this has been corroborated through flipper tag return data from Agatti Island, another Lakshawdeep Island (see Richardson et al., 2013). Atolls in the Lakshwadeep Islands have experienced increases in the number of foraging juvenile green turtles aggregating in atoll lagoons in the recent years causing conflict with local fishers (Lal et al., 2010). Further research is required to determine whether turtle conservation efforts in Sri Lanka over the last 20 years (Ekanayake, 2002) may be linked to this phenomenon.

These studies represent the first ever satellite telemetry studies on Sri Lanka’s turtles, but should not be the last. The results pose more questions than they answer. Researchers in Sri Lanka, India and elsewhere are encouraged to develop partnerships and share resources to develop more telemetry and genetics studies on the countries’ turtle populations. These should aim to fully determine the ecology, range and behaviours of these populations with a view to better informing future conservation efforts.

These figures are from Richardson et al. (2013) and I encourage anyone interested in a better understanding of this paper to visit www.seaturtle.org/mtrg/pubs/. I thank my co-authors for their invaluable contributions to that paper, and for the numerous Turtle Conservation Project staff and volunteers for supporting the tracking project. I also thank Dr BC Choudhury for sending me a copy of the note by Sivakumar et al. (2010).