Leatherback nesting in India is currently restricted to the Andaman and Nicobar Islands (Andrews et al., 2006). A long-term monitoring programme was established in 2008 at Little Andaman Island, and two index beaches, South and West Bay (Figure 1) were chosen to study the recovery of leatherback turtles after the earthquake and tsunami of December 2004 (Swaminathan et al., 2011, 2017). Over the years, the objectives evolved to include monitoring of leatherback nesting at the index beaches through a capture-recapture programme. The data indicate that leatherback nesting on Little Andaman Island has recovered substantially after the 2004 tsunami and seems stable with some fluctuations (Swaminathan et al., 2017). One of the components of the project was to identify the post-nesting migratory routes of leatherback turtles nesting in this region. For the first time in India, leatherback turtles were tagged with satellite transmitters to understand their migratory routes and foraging sites (Namboothri et al., 2012). 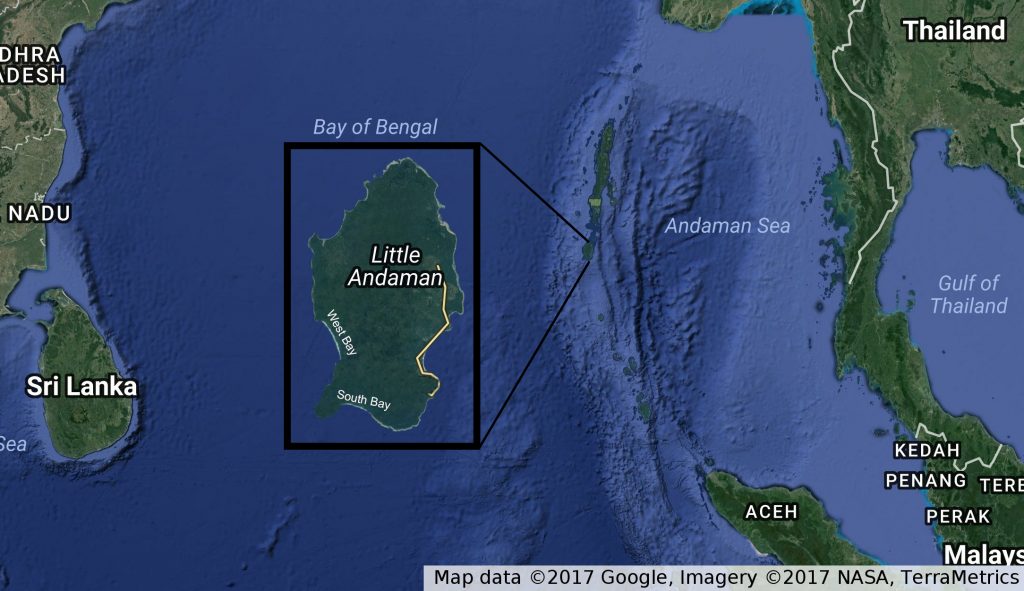 Between 2011 and 2014, ten nesting leatherback turtles were tagged with Platform Transmitter Terminals (PTT), model Kiwisat 202 (specially designed for leatherback turtles by Sirtrack Wildlife Tracking Solutions Ltd.), on West Bay beach. All satellite transmitters were equipped with a saltwater switch, programmed to transmit continuously for the first three months and every alternate day for the rest of the period. The PTTs were attached surgically onto the carapace of nesting females using the direct attachment method (Fossette et al., 2008; Byrne et al., 2009).

All tagged turtles were monitored regularly based on the data received through ARGOS and the data were analysed using the Satellite Tracking Analysis Tool (STAT; Coyne & Godley, 2005; www.seaturtle.org/STAT).

One of the tracked turtles (PTT ID No. 113335 tagged on 3rd February 2013) travelled southeast to the coast of Western Australia (6,713km) before transmission stopped (Figure 2). Another turtle (PTT ID No. 113336, tagged on 5th January 2014) travelled southwest to the Northeastern coast of Madagascar in 395 days, swimming 12,328km. Similarly, PTT ID No. 113337 (tagged on 8th January 2014) travelled close to the western coast of Mozambique in 266 days, covering 13,237km; this turtle also travelled to the north-west coast of the Andaman and Nicobar Islands during the inter-nesting period and remained in the Andaman Sea for several weeks (post-nesting) before heading southwest. Turtle No. 113337 travelled an average distance of 49.8km per day (Figure 2; Table 1).

The patterns of movements demonstrated by adult female turtles tagged in 2013 and 2014 was consistent with those previously tagged in 2011 and 2012 (Namboothri et al., 2012). They traverse much of the Indian Ocean during their foraging migrations, ranging as far east as Western Australia, and as far west as Mozambique and Madagascar. The migration strategy appears to be direct with open ocean crossing or indirect with movements along the coastal shelf. The average distance covered in a day by the nine turtles was 43.5±13.8km (StDev; Range 15.6-60.2km).

While we now have some insight into the migratory patterns of leatherbacks in the Indian Ocean, more satellite telemetry studies need to be carried out in subsequent years to assess if there are other migratory routes taken by the turtles nesting at Little Andaman. Additional data on dive behaviour and oceanography will help us better understand their migratory behavior and identify ‘hot spots’ where leatherbacks are vulnerable to fishing activities.