ON THE RESCUE AND REHABILITATION OF AN OLIVE RIDLEY TURTLE FROM MANNALAMKUNNU BEACH, THRISSUR, KERALA, INDIA

On 12th June 2018, a turtle (Figure 1) was found stranded on Mannalamkunnu Beach (10º39´27´´N, 75º58´09´´E), Thrissur, Kerala. The turtle was identified as an olive ridley (Lepidochelys olivacea). This species is locally referred to as Aamma. Olive ridley turtles are included in Schedule I of Indian Wildlife (Protection) Act, 1972 and thus receive legal protection.

The turtle was about 60cm in curved carapace length and weighed approximately 24kg. The left front flipper of this turtle was missing, and it is unknown where and how the flipper was amputated but possible causes include boat strike, entanglement in ghost net, or incidental capture by fishing gear. The turtle was weak and could barely move. It is unknown how long the turtle was stranded on the beach before it was rescued by volunteers of Green Habitat, a local NGO dedicated to conservation of turtles. The turtle was taken to a rescue centre nearby at Panchavati and placed in a tank filled with seawater. A veterinarian administered glucose intravenously under the front flipper twice a day for two days. As per the advice of the veterinarian, volunteers of Green Habitat then administered glucose orally to the turtle twice a day for a week. The turtle gained strength to eat on its own after 2-3 days and was then also fed daily with fish such as sardines. In the wild, olive ridley turtles feed on fish, prawns, crabs, lobsters, snails, oysters, sea urchins and jellyfish (Chhapgar, 2005). The turtle was kept in the rescue centre for 25 days. Eventually the turtle, when it regained its health to the satisfaction of the veterinarian, was released into the sea at the site from where it was found stranded. 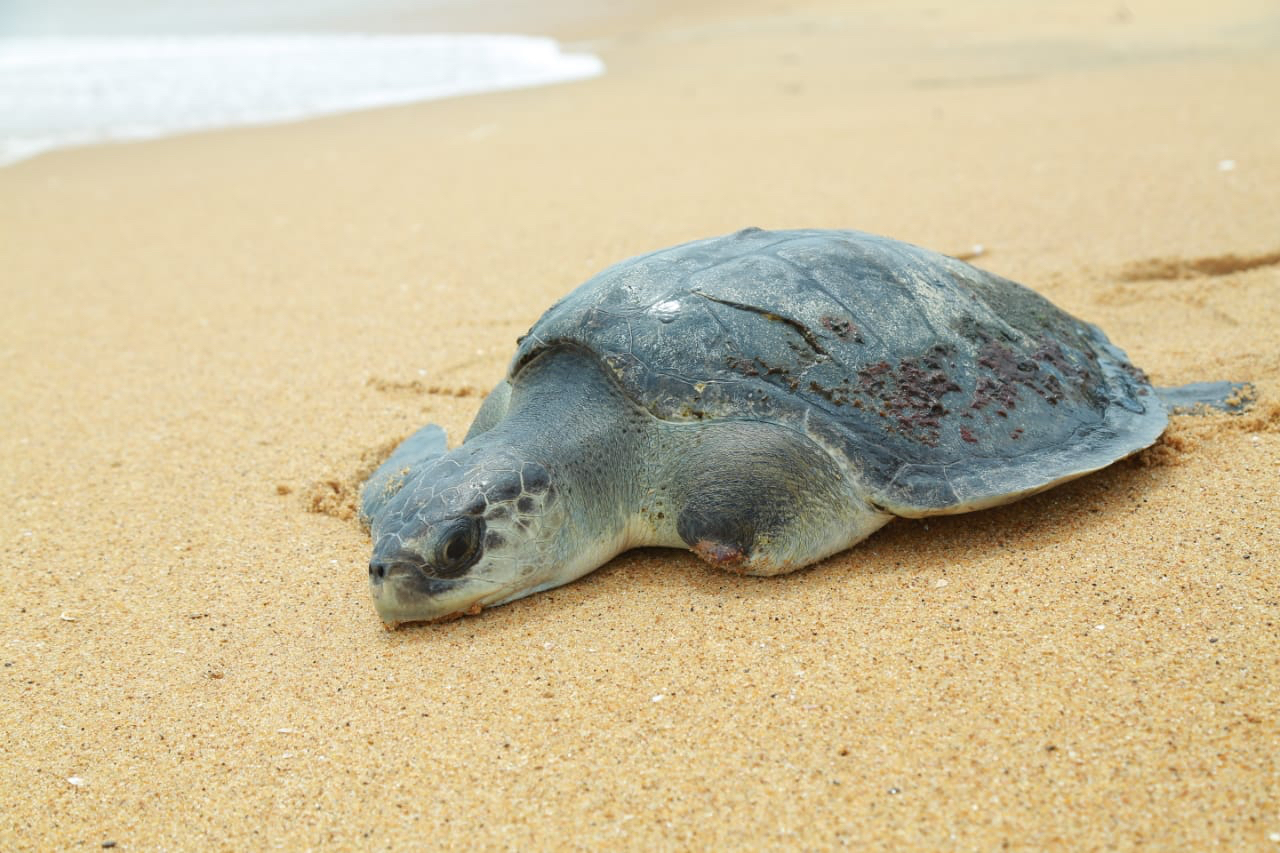 There are reports of olive ridley (Baby, 2012) and leatherback (Dermochelys coriacea) (Anil et al., 2009) sea turtles from the Kerala coast. Recently, Sreekumar et al. (2016) reported a dead stranded olive ridley turtle from Cherai Beach. There may be other instances of stranding turtles occurring along the Kerala coast that have not been properly documented. Reporting of sea turtles that are stranded, or incidentally captured etc. is mainly carried out by Central Marine Fisheries Research Institute throughout India. Kannan and Rajagopalan (2007) made a study on the incidentally captured sea turtles along Kerala state, including all five species that occur in coastal waters of India. According to Rajagopalan et al. (2002), incidental catch of sea turtles along Kerala coast was greatest in the month of January.

As sea turtles regularly occur in the waters around Kerala, increased public awareness may help reduce threats and lead to beneficial actions, such as careful retrieval and release of sea turtles that are incidentally captured by fishing gear.  Additionally, improved public awareness about sea turtles may lead to improved reporting rates of stranded sea turtles along the coast, which would help us better understand both occurrence and threats faced by these species.