WHEN IS A STRANDED TURTLE A BYCATCH TURTLE? ASSESSING POTENTIAL CAUSE OF STRANDING IN SEA TURTLES

“While some of them were found tangled in nets, most lay bloated with their eyes popped out, indicating drowning” (Hemalatha, 2015).

Stranding of live and dead sea turtles may occur for many reasons, such as after incidental capture in fisheries gear (including ghost gear) and shark control gear, vessel strike, ingestion of foreign materials, disease, and development activities, or after specific environmental factors such as freshwater discharge after intense rainfall or low water temperatures resulting in cold stunning (for examples see Casale et al., 2010; Pilcher et al., 2014; Poli et al., 2014; Flint et al., 2015; Flint et al., 2017). However, in areas where mortality of sea turtles accidentally caught in fishing gear is high, there is a tendency to hold fishers responsible for all turtles found washed ashore. In India, the observations used to justify such blame often includes that described in the above quote from Hemalatha (2015)- that bloated turtles with protruding eyes must have drowned after becoming entangled in fishing gear such as trawler or gill nets.

Certainly, entanglement in active fishing gear and ghost gear can result in injury or death. Rates of mortality are often highest in areas where fishing occurs in waters where turtles aggregate for breeding and nesting (e.g. along the Orissa coast; Pandav et al., 1997; Gopi et al., 2007) and ghost gear becomes concentrated by ocean currents (e.g. around the Maldives in the central Indian Ocean; Stelfox & Hudgins, 2015). But holding the fishing industry primarily responsible for turtle mortalities and declines can result in fishers being defensive about their livelihoods (e.g. Tucker et al., 1997; Santora, 2003) and resistant to using modified gear or complying with area or seasonal closures that reduce the rates of sea turtle bycatch (e.g., Tucker et al., 1997; Campbell & Cornwell, 2008).

Bloating in turtle carcasses is not a conclusive sign of drowning; instead, it is caused by gases accumulating during decomposition (Epperly et al., 1996). Evidence is needed to demonstrate that turtles stranded as a result of entanglement in fishing gear, and sea turtle biologists and conservationists wanting to collect information about possible causes of mortality can use the stages of decomposition and injuries or interactions with pathogens described below.

Sea turtles killed at sea often sink, rising to the surface again only when gases produced during decomposition cause the body to float (Epperly et al., 1996). The carcass may then drift with local currents and wind (Epperly et al., 1996; Hart et al., 2006) until it washes ashore as a dead, stranded turtle. The condition of turtle carcasses has been categorised in various studies using different but overlapping criteria and descriptions (Table 1). Categorisation is based on odour, state of skin, scutes, and internal organs, presence of post-mortem abrasions, and state of soft tissue (Flint et al., 2009a; Santos et al., 2018). Santos et al. (2018) also provide photographs that can aid when determining condition state of carcasses that have been submerged during decomposition.

Sea turtles may be alive or at any stage of decomposition when stranded (washed ashore). Stranded turtles can be examined for injuries or exposure to pathogens to potentially identify factors that may have contributed to their washing ashore. However, care should be taken when attributing ‘injuries’ on moderately to severely decomposed and mummified carcasses to any of the causes described below as damage to soft tissues, bones and the carapace may appear as a post-mortem artefact.

Live sea turtles and carcasses in the early stages of decomposition can be examined without necropsy, although examination of internal organs can help determine potential factors contributing to stranding in some cases. Common signs of fishing gear entanglement, boat strike, predation, cold-stunning, disease and debilitation, and plastic ingestion have been described below. Images to help identify the potential cause of injury or death in stranded turtles can be found in some studies (see Innis et al., 2010; Bornatowski et al., 2012; García-Párraga et al., 2014; de Quirós et al., 2016; Nelms et al., 2016; Parga et al., 2017; Stacy et al., 2017; Archibald & James, 2018). Minor abrasions, tears and notches on flipper margins or the carapace are often too difficult to assign to a cause of injury (Archibald & James, 2018).

Entanglement in line, ropes or nets results in characteristic wounds or scars that entirely or partially encircle the front flipper and/or neck. Amputation of limbs may occur if turtles have been entangled in ghost gear for extended periods. (For further information see Innis et al., 2010; Eckert et al., 2012; Barreiros & Raykov, 2014; Stelfox & Hudgins, 2015; Archibald & James, 2018.) Sea turtles that have been entangled in fishing gear may wash ashore alive or dead. Some entanglements may cause sepsis, and result in death long after the entanglement incident occurred (Stacy et al., 2017). Signs of capture myopathy (muscle damage after extreme exertion, struggle, stress; also known as exertional myopathy) could also be present; bruising in the shoulder muscle is indicative of capture in nets but may not always be visible, especially in carcasses that are not fresh. Clinicopathological examination by experienced veterinarians may also detect metabolic acidosis, muscle necrosis and myoglobinuria as described by Phillips et al. (2015). 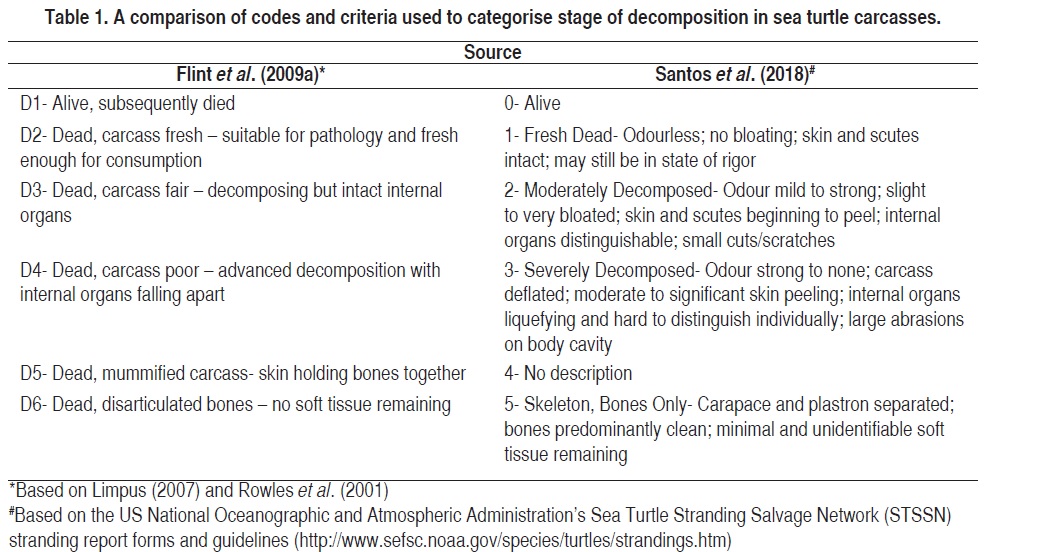 Drowning can result when turtles have been held underwater after capture in fishing gear (such as trawler nets). It is difficult to diagnose drowning as cause of death in stranded turtles, as there is often no external sign of injury. At necropsy, lungs might be expanded and contain fluid, and a thick white or pale pink foam could be expressed from the nostrils or observed in the trachea, bronchi or lungs of recently drowned turtles (Wolke & George, 1981; Stacy et al., 2017).

Decompression sickness (“the bends”) may develop in live turtles that are pulled aboard from water >10 m depth (García-Párraga et al.,  2014). Gas emboli are formed as dissolved gases come out of solution in the blood and form bubbles inside the body on depressurisation. The condition may be identified only by clinico-pathological examination. For live turtles, ultrasound examination is needed for confirmation of decompression sickness/gas emboli; for dead animals, necropsies should be conducted on fresh dead animals, lest decomposition results in confounding gas bubbles in vessels. (For further information on signs and diagnosis of decompression sickness in turtles see Casale et al., 2010; García-Párraga et al., 2014; de Quirós et al., 2016).

Hooks usually cause puncture wounds on the shoulder and/or neck, sometimes with raised scar tissue. If the hook is ingested, fishing line may protrude from the mouth and/or cloaca. (For further information see Watson et al., 2005; Archibald & James, 2018.) Interaction with a hook or hooks may not have been the cause a turtle stranding, but incidental. For example, a turtle that has a hook embedded in a flipper or other soft tissue may otherwise survive.

Boat strike includes collisions with the propeller or hull. Parallel, evenly spaced lacerations (usually on the carapace) indicate the turtle has been hit with a boat propeller. Propeller strike can also cause lacerations on the flippers and head. Impact with a boat hull may result in paint being deposited on the head or carapace. Remember that collision after turtle death is also possible (particularly when decomposing carcasses are more likely to float), so damage and marks should be evaluated carefully. (For further information see Hazel & Gyuris, 2006; Work et al., 2010; Eckert et al., 2012; Archibald & James, 2018.) For dead turtles, examining the brain for signs of blunt impact may be helpful (Stacy et al., 2017). Also, assessing amount of blood in heart chambers may help indicate whether the turtle bled to death from boat strike injury (although is not necessarily the case in all boat strike events; Stacy et al., 2017).

Attack by a predator such as a shark is seen as partial or complete amputation of flippers with circular, shredded or jagged edges accompanied by rake marks on the carapace, missing semi-circular sections of the carapace, and/or lacerations on the head. Note that some predation may occur after the turtle has died. These signs should not be confused with damage from entanglement in fishing gear. (For further information see Horrocks, 1989; Witzell, 2007; Bornatowski et al., 2012; Eckert et al., 2012; Archibald & James, 2018.)

Cold-stunning occurs when sea turtles are exposed to cold water temperatures (generally <11°C), and has been reported in the winter waters of the Arabian/Persian Gulf (Pilcher et al., 2014, 2015; Robinson et al., 2017). Affected sea turtles may float in an unusual position, with the rear of the carapace above the water, the head pointing down, and the front flippers extended out; floating turtles may strand ashore. If cold-stunned and floating for extended periods, turtles may accumulate barnacles but these will attach to any suitable object at the water surface and are not a characteristic sign of cold-stunning. (For further information see Mrosovsky, 1980; Flint et al., 2009b; Pilcher et al., 2014, 2015.)

Disease and debilitation can occur in sea turtles as a result of various systemic disorders or exposure to toxins that leads to lack of adequate nutrition (Flint, 2009b; Manire et al., 2017). These turtles generally appear thin or emaciated, and support a heavy load of epibiota including barnacles, leeches and other marine organisms (Boylan et al., 2017). The movement of these animals is slower than healthy turtles, and may predispose them to other factors that may cause them to strand, such as boat strikes or entanglement.

Ingestion of plastic items can debilitate and kill turtles by blocking or perforating their gastrointestinal tract or bladder, preventing feeding, or increasing buoyancy. Plastic may be observed extruding from the cloaca of live stranded turtles or in their faeces, or found in the gut of dead turtles during necropsy. (For further information see Hoarau et al., 2014;  Nelms et al., 2016; Ryan et al., 2016). Presence of plastic in a dead turtle does not automatically indicate that death was caused by plastic (see Clukey et al., 2017).

Collecting information about stranded sea turtles, including the date, location, species, sex, carapace length, stage of decomposition, and potential cause and condition of each injury, can contribute to a broader assessment of the threats to sea turtles in local and national waters. Assessment of local and national in- water threats can be improved by sharing of information about stranded turtles, through submissions to national stranding databases or publication of observations (e.g. Arun, 2019; James et al., 2019; Ramah et al., 2019; Saleem et al., 2019). More accurate documentation of factors that contribute to sea turtle strandings, such as entanglement in fishing gear, disease, and ingestion of plastic, may help researchers and conservationists in the Indian Ocean and South East Asia to influence policy and work with local communities and fishers to mitigate threats.