Qaru (28.81528°N, 48.77698°E) is a roughly circular, sandy island less than 300m in diameter surrounded by coral reef. It is devoid of vegetation, but there is a small coast guard station and communications pylon based there. Sea turtle nesting occurs all around and over the island. Umm Al Maradim (28.68168°N, 48.65258°E) is approximately 0.55km long by 0.35km wide, again surrounded by coral reef. Shrubs occur over most of the island, especially behind the beach to the north east, and a substantial coastguard station and harbour have been constructed to the south of the island. Sea turtle nesting is mainly confined to the 200m beach at the north east of the island. Both islands are visited by dive operations and day-trippers arriving in boats. These tourists often come ashore to picnic and have barbeques on the beaches.

Hatching success data, the proportion of eggs that produce hatchlings, are useful for understanding threats at nesting beaches and recruitment to predict future population trajectories. Some data have been published on this topic from around the region (e.g. Pilcher, 1999; Chatting et al., 2018) however there is a general lack of published clutch size and hatching success data for hawksbills in the Gulf, which limits our understanding of fecundity of Gulf populations and their conservation status. We aim to partially address this lack through presenting the first data on accurate clutch size and hatching success from Kuwait.

Post-hatch nest excavations to determine hatching success were carried out during field surveys in 2010, 2011, 2013 and 2014. Excavations were undertaken at varying times (up to at least two weeks) following first hatching due to the non-exhaustive survey regime. We encountered hatchlings during excavations that had not managed to naturally escape the nest.

Parameters were calculated using the formula below (Miller 1999) and data summaries presented as mean ± standard deviation.

Hatchlings found alive in the nest at excavation had Curved Carapace Length (CCL) and Curved Carapace Width (CCW) measured using a flexible tape measure to 1mm and were weighed with either an uncalibrated Vastar Pocket Digital Scale or a Tanita 1479V scale to 0.1g. Several additional emerged hatchlings that were opportunistically found on the beach were also measured and weighed. We statistically compared hatchling weights between the two groups (excavation and beach) with the Wilcoxon rank sum test. Statistical significance was accepted at P<0.05. 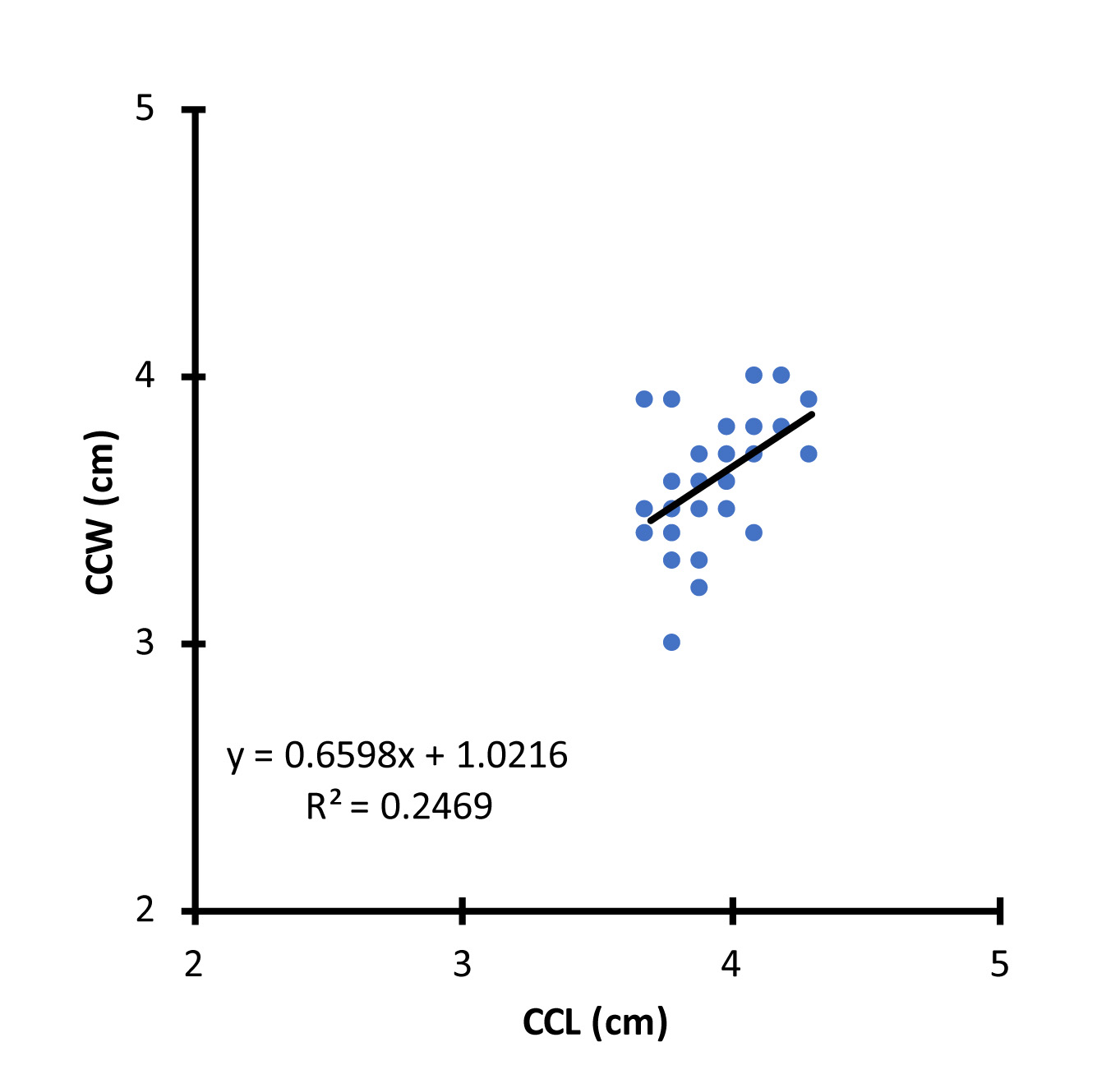 Weights were recorded for eight hatchlings encountered on the beach, which had emerged from two nests, and 70 hatchlings found alive in the nest during excavation of six different nests. Average weights did not differ significantly between the two groups (excavation and beach; W=248, p=0.604), so we pooled the results. Hatchlings weighed on average 11.0±1.1 g (range 8.5-13.8g, n=78).

Our mean CS and number of yolkless eggs (77.1 and 12.5 respectively) is in line with other populations in the region (e.g. 70.2 and 17.1 respectively from Saudi Arabia (Pilcher, 1999)), which is to be expected as hawksbills within the Gulf have evolved and adapted to similar environmental conditions in contrast to populations outside the Gulf (Pilcher et al., 2014a; Chatting et al., 2018).

Average HS was low but variable, again similar to Pilcher (1999), and included six nests with rates of 80% or higher. A larger sample size from any one year would negate any sampling bias that may be present in our current results. However, it is clear that even with a small population, laying only a few tens of nests each season in a very hot environment, lack of adult males and clutch fertility is not yet an issue. However, the number of males siring each new year’s cohort may already be limited as only one adult male hawksbill has been reported to be present in the waters around Qaru for at least 14 years (Rees et al., 2013). The prognosis of increasing global temperatures due to climate change will increasingly female-skew hatchling production unless sea turtles change their breeding phenology.

Contrary to the findings of Pilcher (1999) who found no hatchlings during post-hatch nest excavations conducted two to three days after first emergence, we found up to 36, both alive and dead, leading to our low and variable EHS. The sand above one nest with poor emergence success was blackened or scorched, which suggests some sort of surface fire, possibly a tourist’s barbeque, killed the hatchlings and term embryos below. Other possible factors affecting either hatching or emergence success were identified as roots infiltrating the clutch and numerous stones and cement chunks (from decrepit walkways and platforms) around nests. A full assessment of the diversity of threats to eggs and hatchlings and their impacts on hatching and emergence success is warranted.

Hatchling weights from our study were less than those in Saudi Arabia (Pilcher, 1999) by on average 3.3g, but were of similar length and width. The difference in weight is likely due to considerable dehydration of the hatchlings in our samples that were weighed up to two-weeks from eclosion compared to the weights of freshly hatched hawksbills in the other study.

To better understand annual cohort recruitment into the population of hawksbills nesting in Kuwait a more consistent and extensive nest excavation regime needs to be enacted, ideally at all three nesting areas. A larger sample size will confirm true recruitment levels and provide better understanding of factors causing reduced hatching success, which can be addressed through targeted conservation measures. We encourage all other researchers to publish similar data sets they possess and/or to establish regular assessments of clutch size and hatching successes so that a more complete understanding of reproductive and recruitment dynamics is obtained for the Gulf region.

The authors wish to thank Dareen Almojil, Ali Alhafez, Sassa Georgopoulou, Panagiotis Papoulias, Alonzo Alfaro Nunez, David Robinson, Simone Caprodossi, Aris Vidalis, Stamatis Zogaris, Despina Athanasaki, Georgios Politis, Samantha Jane Howlett, Louisa Akerina, Nikos Nikopoulos, the Senyar Dive Team, The Kuwait Mantas Scuba Diving Club, as well as every individual occasionally participating at the project as a volunteer, for their support of field activities as well as the TOTAL Foundation, TOTAL Kuwait, Al-Nowair Initiative and Wataniya Telecom for funding. Special thanks should be attributed to the Scientific Centre Kuwait, The Voluntary Work Centre Kuwait and the Kuwait Coast Guard for logistical support and all kinds of troubleshooting. We also thank Brendan Godley for constructive comments on a draft of this manuscript. Finally we thank the editor and an anonymous reviewer for suggestions that helped improve the final manuscript.