Green Habitat is an NGO committed to the conservation of sea turtles at Chavakkad beach (10.62o N, 75.99o E), Kerala, South India. This is the largest nesting site for olive ridley (Lepidochelys olivacea) turtles in Kerala, with most nesting on the 6km coastline spanning Edakkazhiyur, Panchavadi and Akalad. Olive ridley turtles nest annually at Chavakkad beach from November-March. The species is categorised as Vulnerable on the IUCN Red List (IUCN, 2010) and included in Schedule-I of the Indian Wildlife (Protection) Act, 1972. Since the largest nesting congregation of olive ridley turtles in Kerala is on Chavakkad beach, conservations efforts at this site are important to the local nesting population.

Threats to turtles at Chavakkad beach

Local fishers and other residents have informed Green Habitat that consumption of turtle eggs used to be a prevalent practice in the region, as it was believed the eggs were a cure for conditions such as asthma and piles (haemorrhoids). The consumption of turtle meat also occurred but was comparatively less common. Threats to sea turtles and their habitats in the area have also included relatively high rates of bycatch (James et al., 2019 and Saleem et al., 2019b), light pollution and beach sand mining (Sundaram, pers.obs.).

Local stakeholders include fishers, teachers, businesspersons and other persons from different occupations. The Forest Department has given support to the NGO by their presence at the meetings with the local fisher folk and other stakeholders. The NGO has also collaborated with local groups and self-government institutions, including the Mullassery Block Panchayat (rural local government), Pavaratty Gram Panchayat (village council), Chavakkad municipality, Seethi Sahib V. H. S. School, Edakkazhiyur, Open Scout Group of Enammakal, and local voluntary organisations, schools, colleges and clubs. The Seethi Sahib V.H.S. school has a club namely National Green Corps and some of the students from this club volunteer for Green Habitat.

At times, there has been no consensus between the various stakeholders, including fishers, government departments and conservation organisations such as Green Habitat, about what should be done to conserve sea turtles.

The Kadalamakale Samrashikkuka (Save the Sea Turtles) programme of Green Habitat started in 1998 and has included activities to stop illegal egg sale and collection, reduce bycatch, and protect turtle nests by moving them to a hatchery. The local community members initially resisted the NGO’s efforts by destroying the turtle nests in the hatchery and objected to the awareness activities about the illegality of selling turtle eggs that would impact their livelihoods. After the initial resistance Green Habitat activities were then ignored, but finally we received slow acceptance as local peoples realised the importance of turtle conservation and also the legal implications.

During the nesting season, nightly foot patrols by volunteers were conducted along Chavakkad beach to look for turtle tracks and nests. The majority of the volunteers were members of the local fishing community, and their involvement allowed Green Habitat to further engage with local stakeholders. Eggs were threatened by human poachers, jackals, and dogs so a hatchery was constructed on the beach. Hatchlings emerging from the hatchery are released to the sea with local fishers and other community folk, Panchayat members, other government officials, college students and school children as invited observers (Figure 1). Specific details of these activities are described by Sundaram et al. (2019) and Saleem et al. (2019a). Green Habitat has successfully protected 56 nests and ensured the safe release of 3,784 hatchlings into the sea to date. If the hatchery programmes were to further involve the local community with incentives and alternate livelihoods, the success of the sea turtle conservation initiatives may further increase. 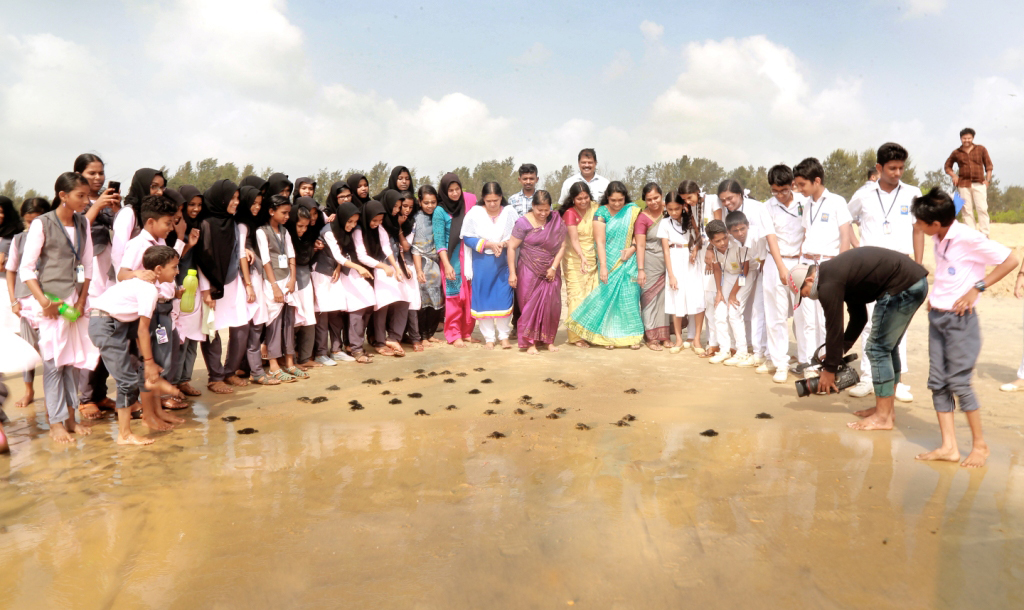 Green Habitat’s endeavour was to educate coastal people not just regarding the need to save olive ridley turtles that nest along the shores but also to create awareness that every species is interdependent and the value of taking care of the environment. Awareness was initiated by grass root activities. Green Habitat conducted awareness activities with five local schools. The hatchery has been used as a venue for activities to raise awareness among local people about threats to sea turtles and their importance. Painting competitions engaged younger children and workshops, lectures and field demonstrations introduced older participants to sea turtle biology, distinguishing among sea turtle species, and monitoring of nesting beaches, collecting sea turtle eggs and hatchery management. One activity focused on the legal implications of poaching of turtle eggs.

Green Habitat has also set up stalls at major biodiversity events. One such stall was put up in Kerala State Biodiversity Congress 2019, Govt. Brennen College, Thalasarrey, Kannur, held during 26-28 January 2019 (Figure 2). The event was attended by approximately fifty participants from the entire state of Kerala. The event was inaugurated by the chief minister of Kerala. The stall by Green Habitat was awarded as one of the best stalls on conservation. A similar stall was set up on the occasion of Panchayat day celebrations at Thrissur district, Kerala. All the panchayats from Thrissur district attended the event. Green Habitat represented Punnayur Panchayat. The event was for five days and Kerala state ministers attended the event. The awareness programmes and the sea turtle release events have been extensively covered by print as well as visual media. All the local media created a mass awareness along Kerala state in general and Thrissur district in particular. 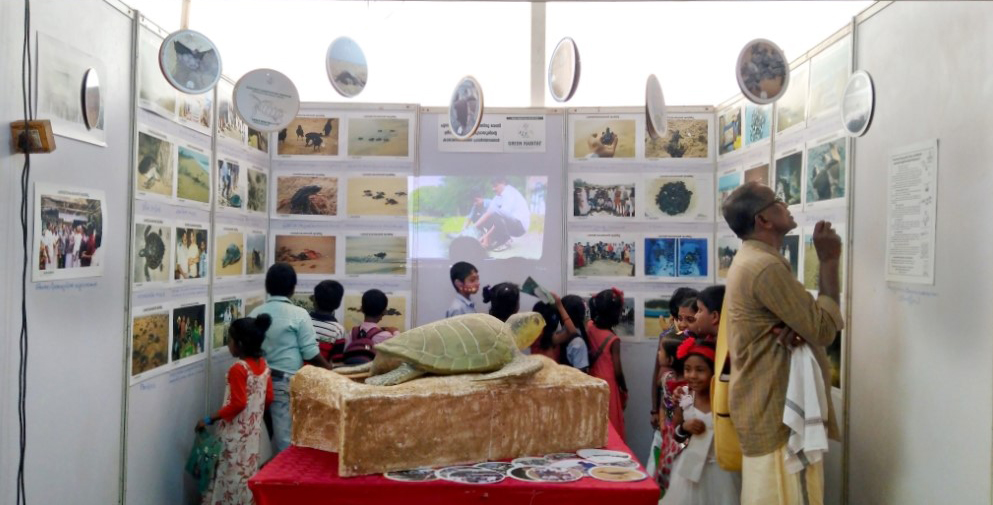 The majority of community members now have a positive attitude towards sea turtle conservation, and do not consider sea turtle conservation legislation to have resulted in loss of livelihoods. Green Habitat awareness programmes have led to nil consumption of eggs and meat, and fishers have started releasing bycatch turtles back into the sea. Fishers are now very careful while fishing in local waters, especially during the breeding season. Removing or reducing night-time illumination on the beaches during the nesting season and beach clean-ups have been conducted with the help of Gram Panchayat. Sand mining has totally stopped on the coastline used by nesting turtles.

Seeing, observing and participating in the conservation activities of Green Habitat has resulted in a gradual shift in the mindset of stakeholders, including the fishers, sea turtle biologists, and local conservationists, and they have now come together. The number of nesting turtles have increased over the years from one nest in 1998-99 to 12 in 2018-19, hopefully due to the efforts of Green Habitat.

Sea turtle ecotourism and a sea turtle festival could be considered in the future by Green Habitat. Sea turtle ecotourism, if well managed, has been identified as a valuable way to conserve endangered sea turtles and also provides livelihood opportunities to the local population (Pawar, 2016). The future plans of Green Habitat also include setting up sea turtle conservation and research centre on Chavakkad beach along with an exhibition centre and a quarantine tank for rehabilitation of injured turtles.