Sea turtle nesting in the UAE usually begins in March and ends in June, so it overlapped with the lockdown period during the COVID-19 pandemic. Emirates Marine Environment Group (EMEG), an NGO supported by public authority, monitors sea turtle nesting at Jabel Ali Reserve (JAR), Sir Bu Na’air (SBN) Island, and 30 other islands. Two decades of records are available for JAR and SBN, the two core sites of the monitoring project. EMEG reports that higher numbers of hawksbill sea turtle nests at SBN have been recorded this year than in the previous year (EMEG, 2017, 2018, 2019; Figure 1). When 400 nests were reached on 12th June 2020, the head of the Environment and Protected Areas Authority (EPAA), of Sharja, visited SBN Island to celebrate what is believed to 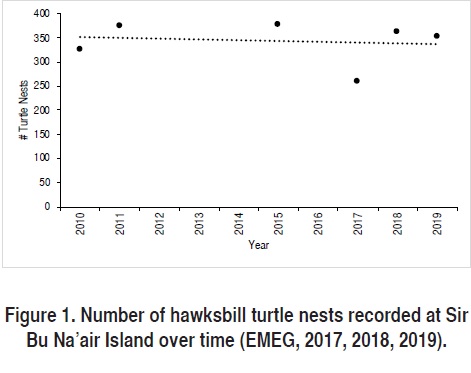 be the highest number of annual nests of the species in the Arabian Gulf region. At JAR, 52 hawksbill nests were recorded last season and 45 nests have been counted to date in the 2020 nesting season. Green turtle nesting is always very low, with only one found annually at SBN and none at JAR.

The main impact of COVID-19 on turtle conservation work in the UAE is the reduced number of available field workers at SBN, down from 14 in 2019 to four in 2020 (including the EMEG President who will remain on the island for the entire season). Members of the smaller team worked two of three shifts each day, monitoring nesting sea turtles and seabirds (e.g., sooty gulls and bridled terns) as well as conducting dive missions related to the conservation of coral reefs. Fewer people also meant that beach cleanups were not possible at the start of the nesting season, and waste on the beach might have been an obstacle for nesting turtles (EMEG, 2019). However, EMEG, in collaboration with EPAA, organised a cleanup day for SBN beaches on World Environment Day, 5th June 2020.

Qatar
Hawksbill sea turtles mainly nest on mainland beaches of Qatar, unlike other Arabian Gulf countries where nesting occurs on islands. Qatar closes some, but not all, of its beaches from April until the beginning of August each year. However, the COVID-19 lockdown meant that there was limited use of most beaches from February.

The number of recorded hawksbill turtle nests has varied over time (Figure 2) based on the data from the Qatar Ministry of Municipalities and Environment, the study team at Qatar University (@albaladeya, 2020), isolated records from remote locations, and periodic visits to some locations by independent field researchers. Field researchers informally visited beaches to monitor turtle nesting during the COVID-19 lockdown and reported more nests than in previous years. For example, the number of nests on Fuwairet Beach have increased from 91 in the entire 2019 season to 118 by the beginning of June 2020 (@albaladeya, 2020), with nesting expected to continue until August. Up to mid-June, 380 nests had been counted in the country (Alyafei, pers.obs).

This season, the first hatchlings for Fuwairet Beach were observed on the 10th June (@albaladeya, 2020). The hatching success (proportion of eggs that hatch to produce a hatchling) in Qatar ranged from 70-80% between 2016 to 2019 and there have been no environmental conditions or changes that would cause a decrease in 2020. As the number of nests is expected to increase in 2020, the total number of hatchlings that emerge during the season is also expected to be higher than that for 2016-2019 seasons.

Bahrain
Sea turtle nesting has not been recorded in Bahrain, but the Environment Friends Society (EFS) has records of elder fishers recalling nests being laid on remote islands of Bahrain in the 1990s. Since 2013, stranded sea turtles have been rescued and treated by the Bahrain Sea Turtle Rescue Team (BSRT) before their release back into the sea. Fishers, people on the beach, and cleanup campaigns report and deliver turtles requiring treatment to BSRT, often including hatchlings stranded with beach debris. 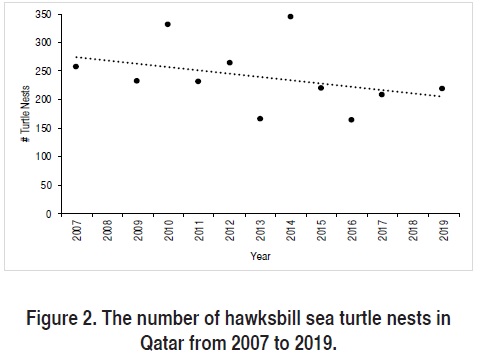 being found by fishers or other members of the public, cleaned of barnacles, and released during these months. During the COVID-19 lockdown, fewer fishers have been out at sea and beach cleanups are non-occurring. Hence, there have been fewer opportunities for sea turtles to be found and delivered to EFS or BSRT. So far in 2020, BSRT has received no turtles but social media posts show ~10 turtles found entangled in ghost gear and released by fishers, while in the area or observed floating at sea (Al-Muhannadi, pers. obs).

Summary
More nests have been or are expected to be laid in the 2020 nesting season compared to the previous years in the UAE and Qatar. There has been a decrease in disturbance on nesting beaches due to the COVID-19 lockdown. However, the lockdown also decreased the number of field workers available for monitoring sea turtles and hence, there may not be records of all the nests. This also meant that there was a decrease in the usual rescue and treatment of stranded turtles. There are also fewer beach cleanup activities, which can result in beach debris accumulation and make it challenging for nesting turtles and hatchlings to navigate the beach to the sea.