Turtles play an important role in coastal and offshore ecosystems as they feed on organisms such as jellyfish, crustaceans, mollusks, and seaweed (Bjorndal, 1997). They, on the other hand, are preyed upon by a number of animals and form an important part of their diet (Hirth, 1971; Stancyk, 1981; Witzell, 1987). Sharks are among the major predators of sea turtles (Cabrera-Chavez-Costa et al., 2010; Hammerschlag et al., 2015; Estupiñán-Montaño et al., 2018). For example, Heithaus (2001) and Simpfendorfer et al. (2001) found that turtles are an important component in the diet of tiger sharks (Galeocerdo cuvier). However, less information has been published on the diet or feeding habits of the silky shark (Carcharius falciformis). Cabrera-Chavez-Costa et al. (2010) reported that silky sharks in the Gulf of Mexico (Atlantic Ocean) mainly preyed on teleost fish and in the Gulf of Tehuantepec (Pacific Ocean) on the crab Portunus xanthusii affinis. 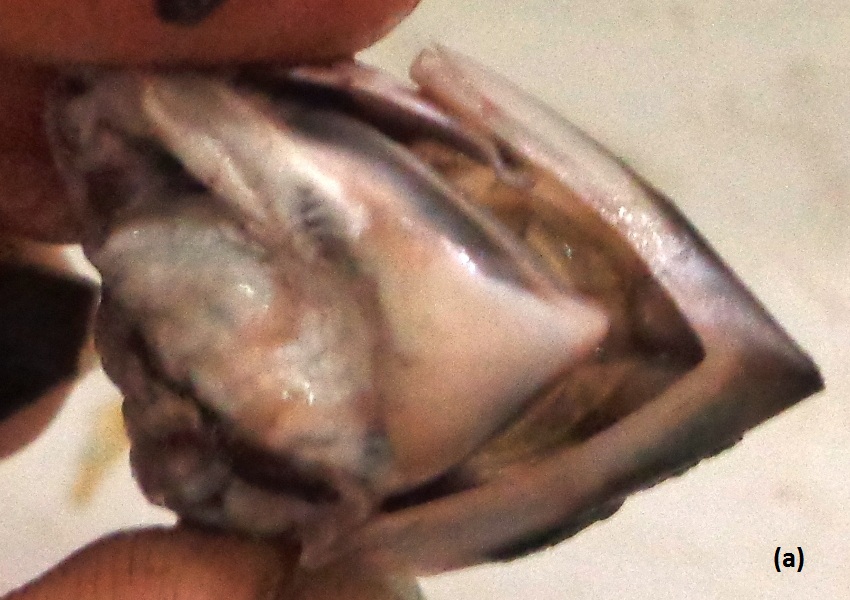 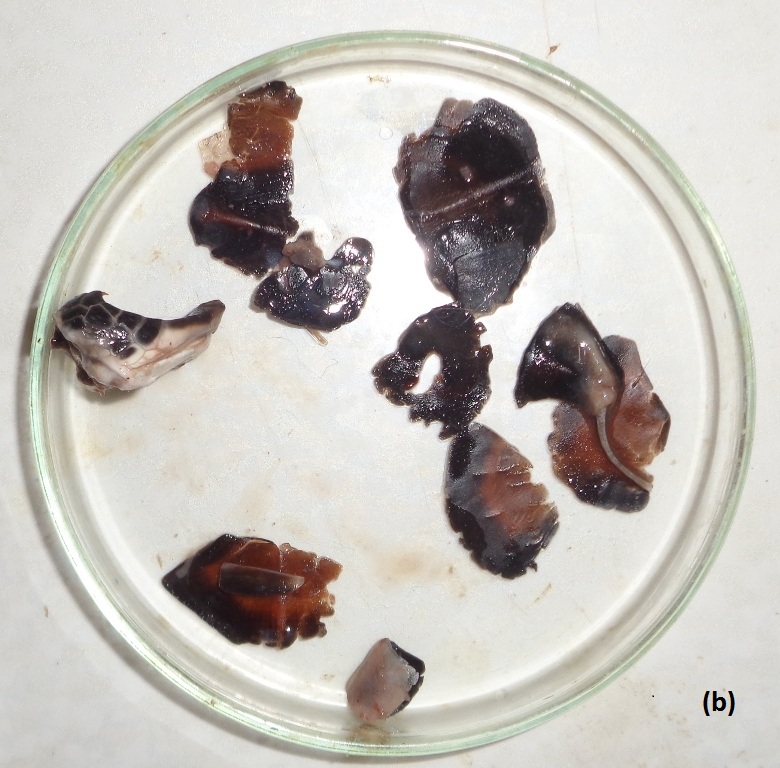 Galvan et al. (1989) found that silky sharks from the Gulf of California mainly fed on the red crab (Pleuroncodes planipes) and to a lesser extent on fish and benthic crustaceans in Baja California. This paper describes an observation of a silky shark feeding on a juvenile green turtle (Chelonia mydas) in Pakistan (Northern Arabian Sea).

Fishers caught a 1.35m long female silky shark on the 1st January 2017, approximately 65km south of Ormara, Balochistan. The authors observed the shark in the Karachi Fish Harbour on the 4th January and found its distended stomach to be of interest. The authors dissected the specimen, removed the stomach, and took it to a laboratory at the Marine Fisheries Department, Karachi.

Eight undigested fragments (Figure 1) of tissue and carapace of what appeared to be an individual juvenile green turtle were found. No other material was present in the stomach, and the remainder of the turtle may have been lost or eaten by another carnivore. The flesh and carapace scutes of the juvenile green turtle had retained their original colour, suggesting that the digestion process was in an early stage. The upper and lower jaws of the turtle were intact and measured 2.2cm in length (Figure 1). Based on the relationship between body length and mouth width from other silky shark specimens, the shark mouth was estimated as 10.7cm wide. These measurements indicate that the 1.35m long silky shark would not have been able to swallow the green turtle in a single gulp. The eight fragments indicate that the shark must have ingested the turtle in multiple bites during a series of lunges.

The silky shark was caught in the offshore waters of Pakistan (Northern Arabian Sea) where the water depth was ~700m. Small green turtles probably inhabit these waters during the oceanic juvenile stage of their life cycle (Bolten, 2003). The capture site was ~65km south of Ormara, a green turtle nesting beach (Groombridge, 1989), so there is the potential for interactions between silky sharks and breeding turtles, hatchlings, and/or turtles of other life stages feeding in the Arabian Sea. Since this report is based on a single observation of a silky shark feeding on a juvenile green turtle, we recommend closer inspection of other shark specimens at harbours to increase the understanding of shark predation and other in-water threats to turtles at different life stages and in different habitats.