Sea turtles spend the majority of the time submerged but, as air breathing reptiles, they need to be at the surface for respiration. The diving behaviour of sea turtles has been reviewed by Hochscheid (2014), who presented the remarkable ability of hard-shelled sea turtles to dive for as long as 10hr and deeper than 200m. However, average dive durations and depths are much more limited than these extremes.

Through understanding sea turtle diving behaviour, we can obtain insights into their physiology and ecology, and this in turn can be used for conservation purposes such as avoiding fishery and turtle presence overlap (Polovina et al., 2003). Or, more simply, identifying changes in diving can be used to infer changes from reproductive to post-reproductive periods (e.g. Hamel et al., 2008, Rees et al., 2012).

Seven of the PTTs provided only location data whilst the remaining two included pressure sensing capabilities that could record and transmit summaries of diving behaviour. This tracking study revealed that turtles remained in Omani seas for extended periods of time and most turtles became resident in coastal areas in waters of <100m depth (Rees et al., 2012). The two turtles with depth recording tags remained in waters <40m deep and were capable of dives in excess of 100min. Data presented in Rees et al. (2012) show differences in dive duration and dive depth between inter-nesting (the days between depositing the first and last clutch within a single nesting season) and post-nesting (the days after depositing the final clutch of a single nesting season) periods.

Here, we revisit the dive data obtained for the two turtles in Rees et al. (2012) that were carrying PTTs with pressure capabilities to explore and present further observations on their dive behaviour from the beginning of the tracking period until the turtles departed the nesting area 20 and 32 days later respectively, after each depositing one further clutch. This includes addressing an unreported period of unusual diving behaviour recorded by one of the turtles and relating the behaviour to readiness for nesting. 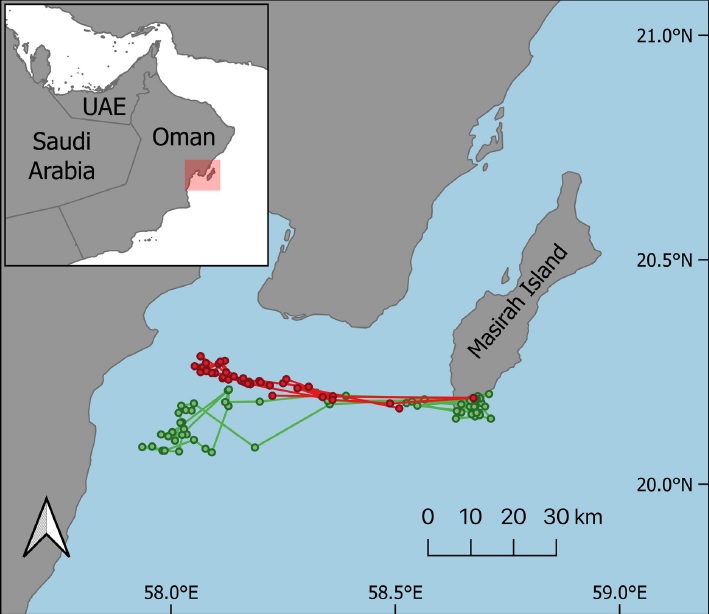 Figure 1. Location of Masirah Island, Oman, and the inter-nesting movements of two olive ridley turtles tracked from southern Masirah during their breeding season in 2008. Turtle C is in red and turtle G is in green. (For colour tracks see online paper.) For this map, raw Argos data were filtered to remove visually obvious outliers with no other processing.

Argos data were downloaded, managed, and analysed using the Satellite Tracking Analysis Tool (Coyne & Godley, 2005). Turtle movements were reconstructed using positions obtained from Argos Location Classes 3, 2, 1, A and B as recommended by Witt et al. (2010). Positional errors were removed by filtering locations that required maximum travelling speed >5km h−1 and turning angle between points of <25°. Tracks were then interpolated to provide a daily location assigned to 12:00h local time. The change from inter-nesting to post-nesting status was visually determined from an individual’s apparent permanent departure from the nesting area to foraging areas tens of kilometres from the nesting site.

We compared dive characteristics in relation to the timing in turtle breeding cycle (i.e. assumed readiness or not to deposit a clutch of eggs) to explore biological drivers for differences in behaviour. 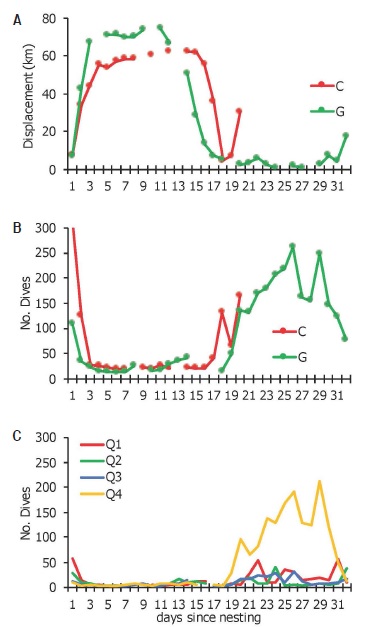 Figure 2. Movement and dive behaviour for two olive ridley turtles during their breeding periods in 2008. Time series is truncated to the first day after permanent departure from the nesting area -assumed to occur after a subsequent successful nesting event. a) displacement from breeding site. b) total number of dives per day. c) number of dives per quarter day for turtle G. Q1 = 02:00-08:00, Q2 = 08:00-14:00, etc. Data gaps are due to no location or dive data being relayed through the Argos system. (For colour image see online paper.)

Turtle C showed an initial high number of dives (>50; Figure 2a) for two days after nesting / PTT attachment and turtle G the same for one day; both turtles then settled into a low number (generally <30) of dives per day until d18 for turtle C and d20 for turtle G when dives per day increased to >120 (Figure 2a; Table 1). This latter change in dive behaviour was assumed to be related to preparation for emergence to nest (see below). Two days after the assumed nesting, turtle C departed the breeding area. Turtle G remained in the area for a further 11 days before departing, undertaking an elevated number of dives per day during this time (Figure 2b).

We compared the dive behaviour of the two turtles and between the two phases of the inter-nesting period, i.e., during the inter-nesting period when the turtles were away from the nesting area and the time after they returned until permanent departure (Table 1). Both turtles increased their number of daily dives once back at the nesting area. The increase in the number of dives was not consistent through the day or between turtles. Turtle G exhibited a dramatic increase in number and proportion of dives in Q4 (Figure 2c; Table 1) whereas the proportion of dives in Q4 for turtle C remained consistent (Table 1). Investigating the length and depth of dives in Q4 revealed that turtle G increased the proportion of both short dives (<10min; 3.4% to 94.7%) and shallow dives (<10m; 1.1% to 97.6%) during Q4 (Table 1). The combination of short dive durations and shallow depths resulted in turtle G spending 95.1% of its time in the surface 10m of water when near the nesting area compared to 9.5% when it was away.

The increased number of dives exhibited by turtles after tag deployment (Figure 2b) may reflect the time the turtles required to normalise their behaviour following the mass of the transmitter and epoxy being attached to the carapace. A return to lower number of dives in subsequent days suggests the turtles were able to adjust to their new condition.

The turtles returned to the nesting area 16 and 18 days after nesting which suggests that they would be ready to deposit a clutch of eggs at this time. However, turtle G did not nest immediately, as indicated by its ongoing proximity to the nesting area for a total of 12 days, but was assumed to have nested and departed at the end of this period. This variable range in inter-nesting periods has been shown elsewhere for olive ridleys (Whiting et al., 2007; Hamel et al., 2008), but the reason for such behaviour in solitary nesting individuals remains unknown.

Turtle G displayed a distinct change in behaviour during its extended period near to the nesting site, undertaking an increased number of shallow night-time dives. Turtle C displayed some evidence of similar behaviour, but as 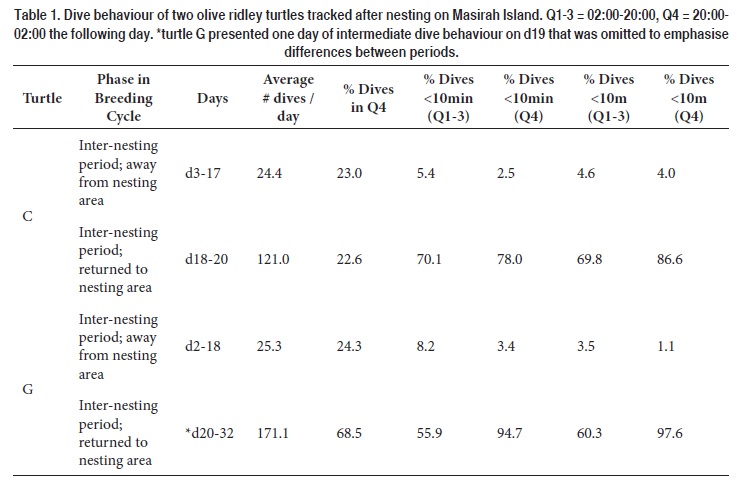 it nested soon after arrival back at the site an increased number of dives per day cannot be confirmed. We suggest that this unreported nocturnal dive behaviour in Turtle G could represent the turtle undertaking scouting behaviour near the coast, and potentially contributed to its choice of when and where to come ashore and nest. In the only other published study to investigate the internesting dive behaviour of olive ridleys, Hamel et al. (2008) also presented data on two individuals that returned to the nesting area after a similar interval post-tagging and remained there for differing durations. The first turtle returned for around three days and the second for approximately 14 days. The turtle that spent a protracted period at the nesting area exhibited increased time at the surface, decreased dive duration, and shallower dives at night (Figures 2, 5 and 6 in Hamel et al., 2008). This is similar to our findings and supports the hypothesis that once turtles return to nesting areas to deposit a clutch, their behaviour changes to a diel pattern driven by the biological need to select a suitable section of sandy coast on which they will emerge to nest. To the best of our knowledge, similar behaviour of increased number of shallow dives following a turtle’s assumed readiness to nest has not been demonstrated for any other sea turtlespecies. This probably due to non-ridley species generally attempting to nest as soon as the ovulated clutch is ready, which contrasts with the ridleys’ propensity to retain clutches for undetermined reasons (Hamann et al., 2003).

Further data on dive behaviour during the inter-nesting period should be analysed and published for this and other species of turtle, to further validate the prevalence of such diel patterns in behaviour near nesting sites and more precisely define the purpose and significance of increased diving activity when a turtle is near the nesting area and biologically ready to deposit another clutch of eggs. The large temporal gaps and poor spatial resolution in the Argos location data from these two existing studies preclude more precise understanding of fine-scale movements during the extended internesting period that could reveal further diel variation, such as turtles moving nearer to the coast during the night. To overcome this, Fastloc® and other forms of accurate GPS positioning tags, which can produce more numerous locations with as little a few tens of metres in location error (Witt et al., 2010; Dujon et al., 2014), should be deployed. A comparative study on conspecifics that delay individual nesting to synchronise into massnesting arribadas (Plotkin et al., 1997), such as occurs on the east coast of India (Shanker et al., 2004) and in the Andaman and Nicobar Islands (Namboothri et al., 2015), would provide insights into behavioural plasticity and further our understanding of the evolutionary lifehistory of this complex, globally distributed species.

This tracking project was part of a larger initiative funded by the TOTAL Foundation and TOTAL SA, Muscat Branch. The authors wish to thank: Salim Al Saady who helped facilitate the project as Director of Biodiversity of the then Ministry of Regional Municipalities, Environment, and Water Resources (now the Environment Authority of Oman (EA)); Khamis Al Farsi, municipal leader of Masirah Island; Salman Al Farsi and the municipality wildlife rangers who assisted with locating and tagging the turtles; and Mussalam Al Madhousi who coordinated activities on the island. We would also like to thank Jean-Claude Farina of TOTAL SA, Muscat Branch; Guy Sallavyard, Gina Sardella-Sadiki, and Laure Fournier of the TOTAL Foundation; and Henri Crouhade, Hubert Faure, and Maurice Drapier of IPEDEX/ SPIE who each supported implementation and showed personal interest in the projects. Permission to work with turtles was granted by Oman’s EA. Thanks to the two anonymous reviewers and the Editor for their comments and observations that helped improve the final manuscript.

Hochscheid, S. 2014. Why we mind sea turtles’ underwater business: A review on the study of diving behavior. Journal of Experimental Marine Biology and Ecology 450: 118-136.