CHANGES IN LAND USE/LAND COVER AROUND VELAS IN THE RATNAGIRI DISTRICT OF MAHARASHTRA, INDIA

Velas (17.96° N, 73.03° E; Figure 1) is a small coastal town in the Ratnagiri District of Maharashtra, India. The town has the highest number of nesting olive ridley (Lepidochelys olivacea) sea turtles in the state (Katdare, 2012). However, depredation of nests by animals including jackals and dogs (Katdare & Mone, 2005; Giri & Chaturvedi, 2006) and illegal take (Giri & Chaturvedi, 2006; Katdare, 2008) have been major threats to sea turtle eggs and hatchlings at Velas and the adjacent coastline. Sahyadri Nisarg Mitra (SNM), a local conservation organisation, established a hatchery to protect sea turtle eggs at Velas in 2002. The hatchery is situated on Velas beach (Katdare & Mone, 2003), although the specific location varies annually (Katdare & Mone, 2005). 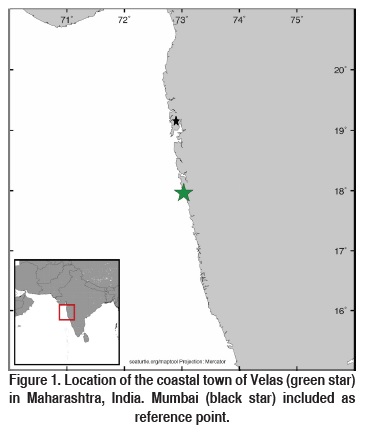 Over time, the number of nests laid at Velas has been decreasing, possibly as a result of historical low hatchling production (Figure 2) in combination with ongoing threats, e.g., interactions with fisheries and ghost gear to other life-stages (e.g., Katdare & Mone, 2005). The emergence success (proportion of hatchlings that 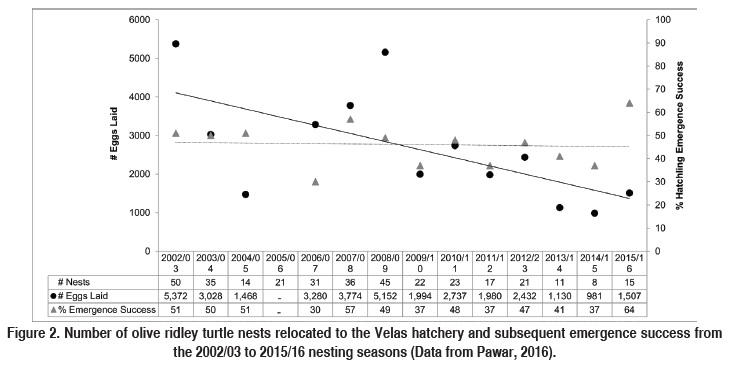 successfully emerge from the nest; see Miller, 1999) has remained relatively stable but is often below 50% (Figure 2). Low hatchling production may be due to hatchery practices that do not follow the recommended guidelines (see Phillott & Shanker, 2018). For example, Katdare & Mone (2003) describe the beach being examined for nests at dawn after which eggs were collected and relocated to the hatchery at Velas; hence, the time interval between oviposition and reburial of many eggs in the hatchery would likely exceed the lowest recommended time of 2-3hr to minimise the risk of movement-induced mortality (Limpus et al., 1979; Parmenter, 1980) and be approaching the maximum recommended time before reburial of 6hr (SToI, 2011).

The main occupation of the people in Velas is agriculture (Kale et al., 2016). However, commencement of the Velas Kasav Mahotsav (Turtle Festival), a joint venture among SNM, the Maharashtra Forest Department, and Gram Panchayat (local council), in the 2006/07 nesting season afforded extra income out of season and made the town a tourist destination (Katdare, 2009). The most popular of such events in the states of Maharashtra and Goa (Kale, 2016), the Velas Turtle Festival attracted ~3,500 visitors to the town in 2015 and generated income for 35 households offering homestays (Sahyadri Nisarga Mitra, 2016). Nearby attractions, including mango picking, bird watching, and coconut and jackfruit collection, have also benefited from the area being recognised as a tourist destination and attract visitors beyond the turtle nesting season (Kale, 2016).

The objective of this study was to assess if changes in LULC had occurred in Velas since the commencement of the Turtle Festival and, if so, predict if such changes could impact this nesting population of olive ridley turtles.

The area of cropland and built-up/urban land in each image was calculated using the polygon and ruler functions. The area of forested land and agricultural land which remained fallow over the study period was not calculated, as this demonstrated minimal change and/or limited potential to impact the nesting beach. Hatchery position over time was also determined through visual assessment of available historical images for the nesting season period of November and April, 2005-2019.

LULC around Velas changed over time (Figure 3). In particular, the area of built-up/urban land increased, and new buildings appeared in closer proximity to the beach. The area of cultivated crops changed, especially in the east and the south, with land that was cultivated in 2005 lying fallow in 2013 and 2019. Hatchery location on Velas beach changed over time (Figure 4), varying in proximity to the Casuarina spp. forest behind the beach (Phillott, pers.obs.). 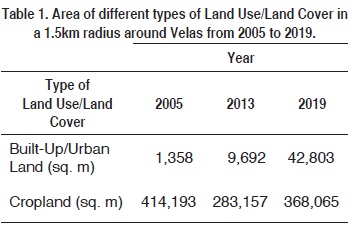 We do not assume that changes in LULC around Velas can be solely attributed to the increasing popularity of the Turtle Festival and associated development, but some are likely to be related. In particular, the increase in builtup and urban land over the study period (2005 to 2019), despite the decrease in population size, will include the increased number or improved facilities of homestay ventures from 6 in 2006 to 35 in 2015 to support increased tourism to the region facilitated by the Festival (Sahyadri Nisarga Mitra, 2016) (Table 2); this may be better able to understand after the 2021 Census of India. But even if not directly related to tourism and the Turtle Festival, LULC changes around Velas could have implications for the nesting turtles and their eggs and hatchlings which are now important to the local economy. 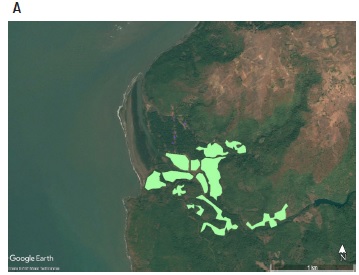 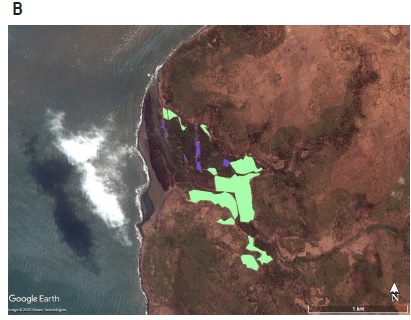 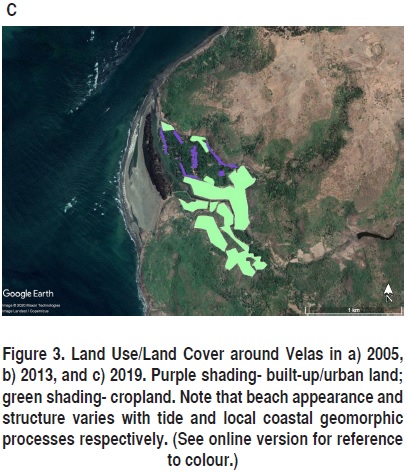 Increased residential development, especially in a coastwards direction, and corresponding increase in artificial lighting can influence both nesting and hatchling turtles. A negative relationship between nestsite selection and the intensity of artificial light has been found in many studies, including olive ridley turtles in Odisha (Behera & Mohanta, 2018), green, leatherback and loggerhead turtles in Florida (Price et al., 2018; Weishampel et al., 2020), green and loggerhead turtles on the Mediterranean coast of Israel (Mazor et al., 2013), and hawksbill and loggerhead turtles on the Brazilian coast (Colman et al., 2020). (Note that Mazor et al. (2013) found that geographical features (cliffs), human population density, and coastal infrastructure also explained nesting patterns.) Turtles deterred from nesting at Velas by artificial light may instead choose adjacent beaches with lesser nest protection initiatives, so that more eggs are vulnerable to depredation and illegal take. Disorientation and misorientation of hatchlings due to artificial light from coastal development can occur on land (e.g., Karnad et al., 2009; Rivas et al., 2015) and in 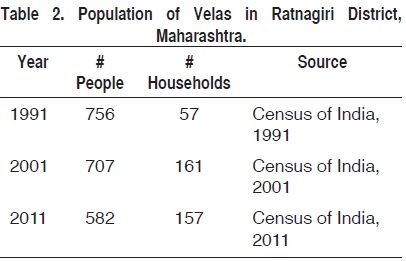 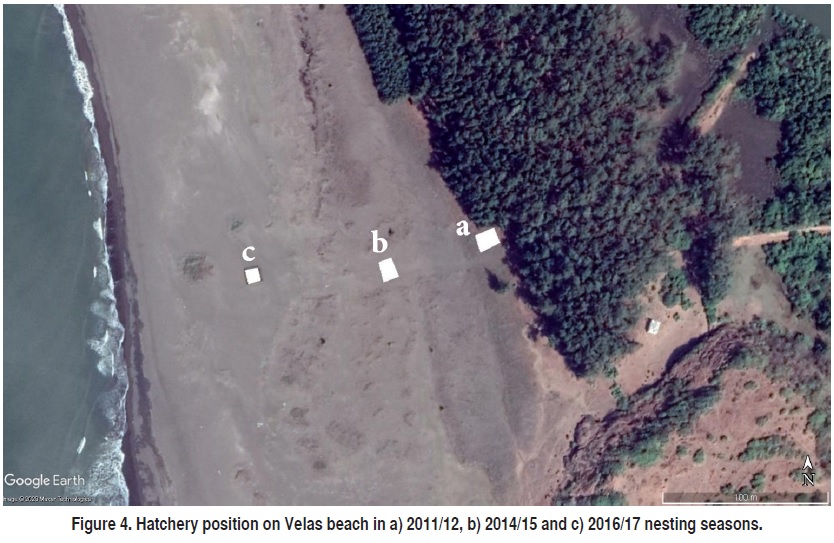 the water (e.g., Truscott et al., 2017; Cruz et al., 2018), and both will increase vulnerability to predators. Losses of eggs and hatchlings as a result of artificial light may reduce population recruitment, although this could take decades to be detected (Dimitriadis et al., 2018; Colman et al., 2020).

The impacts of artificial light can be managed by preventing areas from being exposed to artificial light, shielding lights from entering areas not intended to be lit, limiting the duration of lighting, changing the intensity of lighting, and changing the spectral composition of lighting (see Gaston et al., 2012). Beach plantations of Casuarina spp. can be an effective barrier against light (Karnad et al., 2009). The dense Casuarina spp. forest and other vegetation between the hatchery and Velas town probably shields the beach from much light pollution at present, and its ongoing presence should be a priority. However, local managers and conservationists should also recognise the potential threat of exotic Casuarina trees to nesting beaches and incubating eggs (e.g., Awale & Phillott, 2014; de Vos et al., 2019) and situate the hatchery at an appropriate distance in addition to selecting local tree species for future forest replacement and reforestation efforts. Given the local community engagement with the Velas Turtle Festival and turtle conservation, they should be included in discussions about restrictions on light height, wattage, and wavelengths, potential shielding and restricted hours during turtle nesting and hatchling emergence periods, the proximity of future development to the beach, and importance of maintaining shielding vegetation between the beach and the town. Planning tools are also available to assist during development of coastal areas for tourism (e.g., Verutes et al., 2014) and beach mapping can be used to identify areas on the beach
that experience low light spillover (Karnad et al., 2009) suitable for the hatchery.

Most land holdings in the Ratnagiri District are small (1-2ha) to medium (2-4ha) scale (Department of Agriculture, 2016). The area of cultivated cropland decreased from 2005 to 2013 then rose again in 2013 (Table 1). This variation could be due to change in occupation, environmental conditions, market demand, or other factors. Common crops grown in the coastal areas of the District include cereals (e.g., rice, finger millet, maize), pulses (e.g., gram, moong (green gram), chawali (black eyed bean), wal (green bean), tur (pigeon pea/red gram), udid (black gram), fruits (e.g., mango, cashew nut, coconut), vegetables (e.g., ladyfinger, green leaf vegetables, brinjal, chilies, bottle gourd), and fodder (Rathod & Sapkale, 2015; Department of Agriculture, 2016). Commonly used chemical pesticides in Ratnagiri are Chloropyrifos, Cypermethrin, Hexaconezole, Imidacloprid, Monocrotophos, Phorate, and Quinalphos; farmers may also apply Neem to control pests (Tari & Patil, 2017). Nesting beaches in proximity to croplands may be at risk for exposure to pesticides, as demonstrated by the detection of herbicides in beach sand at Mon Repos in Australia due to surface and ground water transport (Allan et al., 2017), although the effect of such chemicals on sea turtles and their eggs is unknown.

By all accounts, those involved in organisation of the Velas Turtle Festival have strived to protect sea turtles, raise general awareness about sea turtles, and benefit local stakeholders. Community-based conservation initiatives include the ban on sand and water sports at Velas beach during the nesting season, relocation of fishing vessels from Velas to the adjacent village of Harnai, and 10% of the income resulting from home stays being contributed to turtle conservation (Parkar, 2014; Pawar, 2016). Hence, there is a high likelihood that the Velas community, NGOs and other stakeholder in the Turtle Festival will be interested in monitoring and limiting the potential impacts of changes in LULC on the nesting sea turtle population. LULC changes associated with other Turtle Festivals in the region, e.g., Anjarle, should similarly be monitored.

We examined changes in the area and location of builtup and urban land as a proxy for potential exposure to artificial light using Google Earth; satellite imagery and data from Google Earth Engine could provide a more sophisticated assessment. Night sky brightness can be directly measured using an instrument such as the Sky Quality Meter (see Hänel et al., 2018; Longcore et al., 2020). Efforts to manage artificial light exposure should also involve the local community. If agriculture adjacent to Velas beach were to intensify in the future and potential exposure of turtle eggs to pesticides was a concern, pathways of transport and mitigation strategies should also be explored with local stakeholders.