We are in a renaissance period of sea turtle research and conservation efforts around the world. There are more people studying and conserving sea turtle populations in more areas than ever before. Scientists are using both well-proven and novel field and analytical techniques with great success. Yet still there are many fundamental questions relevant to sea turtle biology and conservation for which the answers have remained elusive. What are their maturation ages? Where are the hotspots of oceanic juvenile presence? Does pollution such as microplastics cause immunosuppression? Indeed, a myriad of basic aspects about this ancient clade need to be clarified, but what are the truly burning questions?

A decade ago, Mark Hamann and 34 colleagues published a comprehensive analysis of sea turtle research and conservation priorities based on a review of the literature and professional feedback (Hamann et al., 2010). This was a monumental effort that provided a blueprint for the sea turtle research and conservation community. So far, the paper has been cited ~495 times in the literature, underscoring its value as a guiding document for defining research priorities. Six years later, ALan Rees and 43 co-authors teamed to publish a follow-up the 2010 paper (Rees et al., 2016), evaluating the progress in closing information gaps identified in Hamann et al. that had been achieved in the intervening years. This effort expanded on Hamann et al.’s work, and renewed focus on the most salient issues that should be addressed in sea turtle research and conservation. Since then, a third review by Natalie Wildermann and 32 colleagues has been published (Wildermann et al., 2018), which focuses exclusively on juvenile turtles, a life-stage that seems to have a disproportionately large number of outstanding questions about their biology. The team conducted expert elicitation and the result is the go-to document to identify the topics relating to immature turtles most in need of future study.

All three papers shared similar approaches to generate clear and well-justified research priorities. Typically, a core group of co-authors conducted initial literature
reviews using Web of Science™, a publisher-independent global citation database, with key input terms such as sea turtle, marine turtle, etc. Upon generating a list of papers, the core authorship group would identify additional thematic and regional experts from around the world and invite them to participate in the latter stages of the research prioritisation process. The expanded author groups would then come up with a list of key research gaps, and smaller teams would draft ‘mini-reviews’ for each theme or question. I believe this approach was a good one, in that it made use of existing literature and added contemporary knowledge based on researcher experience. The groups of sea turtle experts involved in each review included many of our communities’ foremost researchers, and the teams represented species specific and regional expertise from around the globe.

The reviews by Hamann et al., Rees et al., and Wildermann et al. are especially helpful to orient both new and experienced researchers about what is known about sea turtles and where we as a research and conservation community need to focus our time and efforts. I should acknowledge that I am a (proud) coauthor on each of these papers, and thoroughly enjoyed working with so many wonderful friends and colleagues. However, this also makes me somewhat of a partisan reviewer of these papers; nevertheless, I have tried to present a balanced summary of each paper as if I were reading them for the first time. I’ll also mention that this ‘review of reviews’ includes three papers, all published in the peer-reviewed journal Endangered Species Research (ESR). This is not an advertisement for the journal, but rather a product of the fact that under the leadership of Editor-in-chief Dr. Brendan Godley, ESR has published numerous seminal review papers that summarise the biology and conservation of imperilled species, including more than just sea turtles. Congratulations to ESR and to all the authors that helped get these reviews completed and these guiding questions into the literature!

The paper by Hamann et al. tops out 22,351 words and over 24 journal pages. It has 356 citations and a single table that summarises the findings of the review. Thirty five authors from around the world participated and provided expertise for all seven sea turtle species. The methods for this review included an initial search on the Web of ScienceTM for the years 2006 to 2009 using a variety of search terms such as sea turtle, marine turtle, and conservation. A total of 813 papers were encountered using these search terms, and from these a total of 35 sea turtle experts from 13 countries were identified and invited to participate in the expert solicitation process. In this, each was asked to propose up to 10 ranked ‘research questions to assist effective sea turtle conservation over the next 10 years’. A total of 347 questions were grouped into themes and subthemes and then into 23 metaquestions.

These metaquestions were circulated to all 35 participants for consensus, with a goal of selecting the final 20 questions (Table 1) that were deemed most important and inclusive; these were organised into five categories: (1) reproductive biology, (2) biogeography, (3) population ecology, (4) threats, and (5) conservation strategies. After reaching consensus on the final 20 questions, teams of up to three co-authors drafted the supporting text for the description of each metaquestion. These topical descriptions were written with a focus on those most commonly occurring ideas within each theme while also trying to capture all ideas presented by individual questions.

Although more text heavy (one table, no figures) than the other papers, Hamann et al. (2010) does a super job of introducing the hybrid approach of using literature review and expert opinion to describe research and conservation needs for sea turtles. The paper is well-organised and easy to follow, such that a reader interested in a specific topic can easily find it in the paper. The paper doesn’t elucidate the regional nature of research gaps, thus there is no specific mention of the Indian Ocean. Nevertheless, Hamann et al. (2010) set the standard for future sea turtle reviews and even if a bit older than the other papers, it is still a go-to source for learning about information gaps and research priorities for sea turtles around the world.

This review is the largest among the three that I discuss here, including 44 co-authors, 39,417 words, 45 published pages, and a whopping 746 citations. The overall goal was to explore the extent to which the 20 research and conservation questions emerging from Hamann et al. (2010) had been addressed in the intervening years. The authorship team conducted a systematic review using all databases in the Web of ScienceTM and search terms of sea turtle, marine turtle, loggerhead turtle, green turtle, leatherback turtle, olive ridley, Kemp’s ridley, hawksbill turtle, and flatback turtle. This search yielded a list of 707 articles that was honed down to remove grey literature and any duplicate listings. A subset of authors then reviewed each publication to ascertain the extent to which any of the original 20 questions highlighted in Hamann et al. (2010) had been addressed. When possible, each paper was classified by sea turtle species and ocean basin. Next, 42 publishing sea turtle researchers provided insights about the three most relevant questions in Hamann et al. (2010) that matched their expertise. Based on this feedback, small groups of up to three co-authors compiled summaries on recent progress towards answering each of the 20 questions.

Overall, 605 papers were reviewed in full and 355 were determined to have addressed the 20 key questions in sea turtle research and conservation; 40 of these papers cited Hamann et al. (2010). The paper was organised into subsections that summarise progress for each question from Hamann et al. These summaries referenced recent findings together with foundational research carried out prior to publication of Hamann et al. (2010). 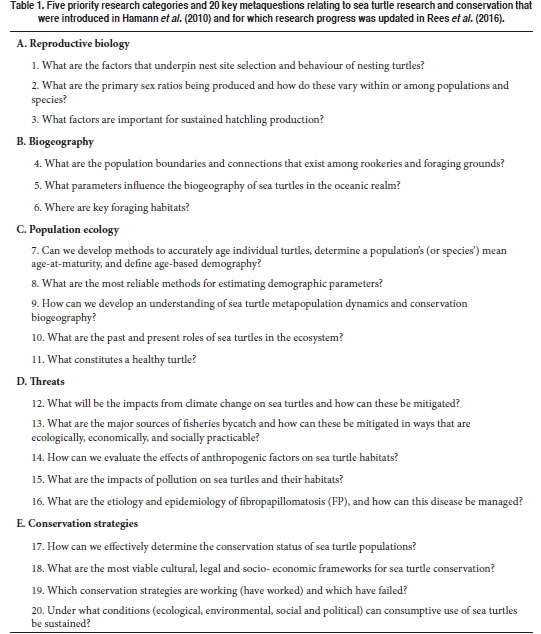 With respect to the Indian Ocean, Rees et al. describes that this region, along with the Pacific, are areas where the greatest genetic advances have occurred, especially for green turtles, hawksbills, olive ridleys, and loggerheads. However, across all species, the paper also notes that eight of the 12 regional management units with critical data needs as per Wallace et al. (2011; PLoS ONE 6: e24510) are in the Indian Ocean. Rees et al. (2016) also underscores that key information about hatching production is missing for almost all species and populations in the Indian Ocean.

Rees et al. (2016) includes several figures and tables to help describe the review’s results. I found Figures 1 and 2, which described the proportion of recent publications that addressed Hamann et al.’s burning questions to be useful and instructive. Figure 2 is especially helpful for learning about results by species and ocean region. An appendix at the paper’s end provides an exhaustive list of the papers published in 2014 and 2015 that address the 20 questions highlighted by Hamann et al. (2010).

As to be expected of a review focusing only on one sea turtle life-stage, Wildermann et al. (2018) is shorter than the afore discussed reviews, coming in at 16,621 words, 21 published pages, and 240 citations. However, the involvement of 33 authors from around the world signifies that his paper is just as robust and inclusive of the research community as the other reviews.

To identify existing knowledge gaps and research priorities for immature turtles, a core group of co-authors assembled a team of sea turtle experts by searching for member profiles on the IUCN Marine Turtle Specialist Group website that indicated research on immature sea turtles, as well as determining who was researching immature turtles based on a literature review on the Web of ScienceTM. The search included terms immature, juvenile, sub-adult, sea turtle, and marine turtle. Each returned article was then evaluated for topical relevancy to immature life stages of sea turtles. Next, a collection of juvenile sea turtle researchers who authored these papers were invited via email to participate in an online survey via the tool Survey Monkey®. These experts were also asked to suggest up to five colleagues that work in the field, in effort to involve as many juvenile sea turtle experts as possible.

The greatest achievement of Wildermann et al. (2018) is their comprehensive list of research questions involving juvenile, or immature sea turtles. The paper provides a total of 20 salient questions, divided among four research themes: population ecology, habitat use and behaviour, threats, and management. Regarding the Indian Ocean, the pertinent findings of the paper’s gap analysis are that this region is one for which very little information on immature turtles is available. The authors lament that low number of Indian Ocean researchers and suggest that the Indian Ocean is a region where Local Ecological Knowledge could help fill the information void.

Wildermann et al. (2018) makes use of excellent and informative tables and colour figures. Readers are presented with easily interpreted graphics relating to the experts who provided insights, survey questions and expert responses, a comparison of the number of studies of all life stages versus just juveniles, and the resulting priority research questions. This paper is also the only of the three to employ rigorous statistical analyses (e.g., multiple correspondence analysis) to describe the trends in responses among experts. Finally, the team’s ranking for immature turtles in terms of priority species and regions that need more attention was of great value. Like the other two reviews, this paper is a must read for learning about the state-of-the-art knowledge about immature turtles. 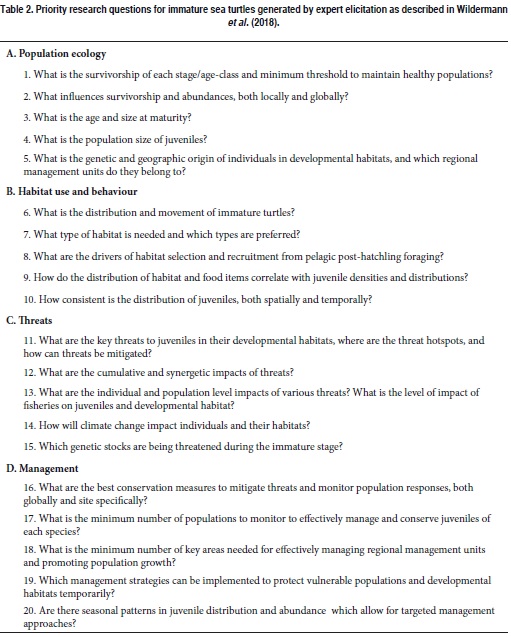