There is a unique nesting population of olive ridley turtles (Lepidochelys olivacea) on Masirah Island, estimated to have around 150 turtles nesting annually in the 1970s (Ross & Barwani 1982). The population has subsequently received relatively little study (Rees & Baker 2006) and no trend in nest numbers is available to date; thus, the current status of this unique population is unknown. The only knowledge about movements of this population comes from a tracking study by Rees et al. (2012; n = 9), revealing five distinct inter-seasonal foraging areas (Figure 1). The turtle that is depicted in the most southern location in Figure 1 employed a vagrant strategy, constantly moving through oceanic and coastal waters in eastern and southern Oman, whereas the others resided in more spatially restricted locations. When northern and southern turtles were assessed as separate groupings, results from this study suggested that carapace size was related to foraging region (Rees et al., 2012). We are interested to see how representative of the population these results were. However, given the high cost and typically low sample size of satellite tracking studies, we sought the use of less costly alternative or complementary method to identify patterns of spatial distribution of olive ridley turtles in this region of the Indian Ocean.

Stable isotope analysis (SIA) has become a powerful and widely utilised tool in ecological studies and has been used to study marine turtle spatial, foraging, and reproductive ecology. The full potential of SIA was recently reviewed (Figgener et al., 2019; Haywood et
al., 2019), and this includes the ability of SIA to assign individual turtles to specific foraging regions, given clear regional variation in stable isotope values (e.g., Ceriani et al., 2012; Bradshaw et al., 2017). This spatial variation is derived from food web isotopic signatures being reflected in the tissues of organisms and these signatures vary spatially based on a variety of biogeochemical processes (Hobson, 1999). For example, inshore food webs, linked to benthos, generally have higher δ13C values than those from offshore pelagic food webs (Hobson, 1999). 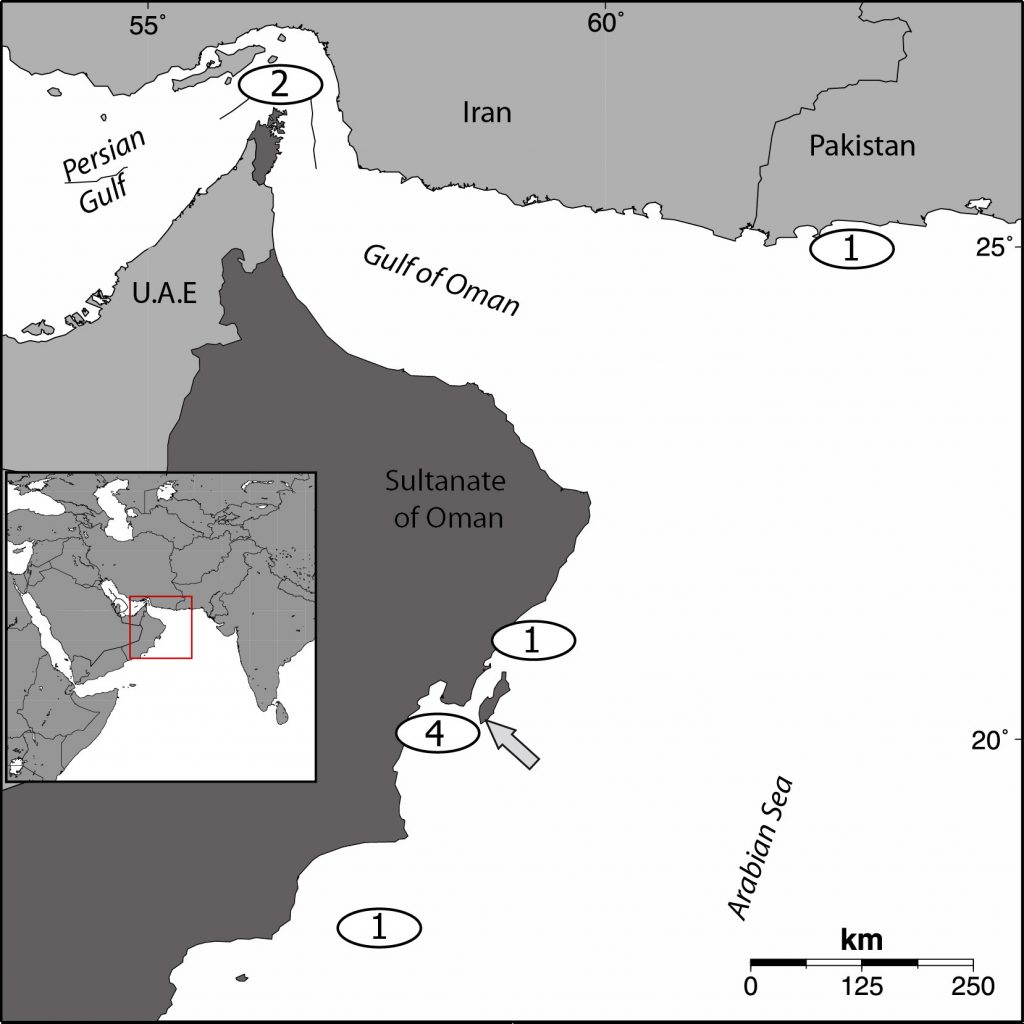 Figure 1. End locations of the only nine olive ridley turtles tracked after nesting on Masirah Island. Arrow indicates tagging site at the south of Masirah Island. Numbers indicate how many turtles used the location as a foraging area. Base map made in MapTool, a free map creation tool from seaturtle.org.

Carbon and nitrogen isotopes analysed from epidermis samples have been used to characterise loggerhead turtles (Caretta caretta) according to foraging area which identified a phenotypic difference between the underlying grouping, where body size was related to δ15N (e.g., Zbinden et al., 2011; Ceriani et al., 2015), possibly suggesting phenotypic influences based on trophic foraging level. Here we use SIA of δ15N and δ13C to obtain isotope signatures of olive ridleys nesting on Masirah Island in an attempt to identify correlation between turtle size and stable isotope ratios to gain some further insight into their spatial ecology; with both the Indian Ocean and the species being underrepresented in global SIA studies (Pearson et al., 2017; Haywood et al., 2019).

Small epidermis samples (approximately 5mm by 5mm) were collected by researchers from the Environment Society of Oman (ESO) from 14 olive ridley turtles that were encountered while nesting on Masirah Island, Oman (nine in 2013 and five in 2015).

Samples were stored in 100% ethanol, initially at -5°C and subsequently at room temperature until analysis. In addition to tissue sample collection, two of the turtles were flipper-tagged (one each year) and Curved Carapace Length (CCL) and Curved Carapace Width (CCW) measurements were recorded to the nearest half centimetre for all turtles.

Samples were prepared at the University of Exeter’s Centre for Ecology and Conservation. Epidermis samples were separated from the dermis using a scalpel, then rinsed with deionised water, soaked for 24 hours, and dried in an oven at 60°C for 48 hours. Samples were then weighed to ~0.7mg (± 0.01mg) and folded into standard tin capsules prior to analysis. We were interested in the consistency in values for tissue samples from the same individuals and prepared replicate samples from four turtles.

Samples were sent to Elemtex Stable Isotope facility (www.elemtex.com) and combusted to analyse carbon and nitrogen isotope ratios, along with standard reference materials, Pee Dee Belemnite (PDB) and atmospheric nitrogen (AIR), for calibration. SI results of carbon and nitrogen ratios were given as parts per thousand (‰) using the equation: δΧ = [(Rsample/Rstandard) – 1] × 1000 (where X is δ15N or δ13C and R is the corresponding ratio of 15N/14N or 13C/12C) and compiled for analysis.

The δ15N and δ13C were plotted, against each other and against CCL to identify evidence of clustering that might support previous findings identifying a tentative north – south dichotomy in body size (Rees et al., 2012). We manually divided the turtles into three size classes (CCL < 74cm, CCL 74cm-77cm and CCL >77cm) to simply investigate any relationship between isotopes and body size. 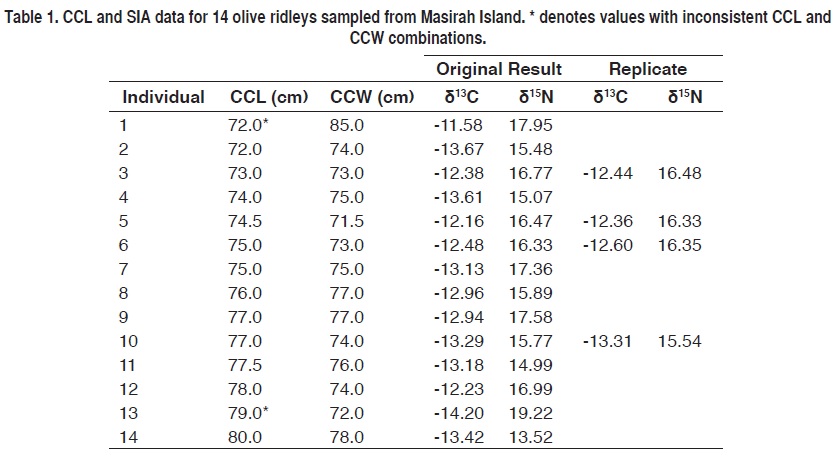 We obtained δ15N or δ13C values for all 14 sampled olive ridley turtles (Table 1). The results for four replicated samples were in close accordance with the original result (Figure 2), so all original data were kept. The CCL and CCW value combinations for two turtles were inconsistent (i.e., greater than 5cm difference between the two measurements; Rees, pers.obs.) and cast doubt as to accuracy of the CCL measurements (Table 1). 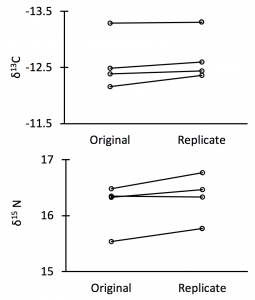 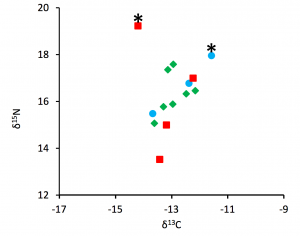 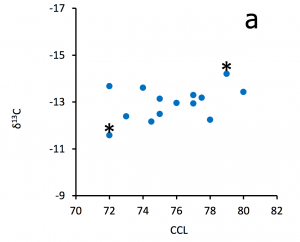 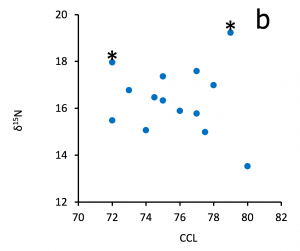 Figure 4. δ13C (a), δ15N (b) and CCL values for the 14 sampled olive ridley turtles. Data points with suspect CCL assignation are identified with an asterisk. No significant trends were observed.

The close similarity in values between replicate samples from individuals suggests sampling and analysis were carried out in a manner sufficient to produce robust results and that inferences made from the absolute and range of values for both isotopes are reliable.

No meaningful correlation between stable isotope values and body size was observed when considering the carbon and nitrogen stable isotope ratios singularly or in tandem. As the sampled individuals were not tracked and no isotope-body size effect was observed, no inferences can be made regarding foraging site and body size. Lack of differentiation can be due to a number of factors, including low sample size, potential heterogenous prey consumption at each foraging habitat that obfuscates dietary specific isotope signatures, or no difference in the baseline isotope ratios in these geographically separated foraging grounds (see Haywood et al., 2019).

Despite lack of characterisation found with the present samples, it is worthy to replicate and expand the study to incorporate a larger number of sampled individuals (suggested N≥50) and include contemporaneous tracking of a subset of the individuals (suggested N=15-20). Results from the tracking aspect alone would further highlight the relative importance of differing foraging locations and corroborate or refute the north-south body size dichotomy and incorporation of SIA may reveal further insights into foraging site and body-size trade-off, where productive foraging sites lead to increased body size.

Furthermore, due to the area’s regional importance for sea turtle nesting (Ross, 1981; Ross & Barwani, 1982, Willson et al., 2020), it would be useful from a management perspective to also determine stable isotope values for the other three species of turtle found on Masirah (loggerhead turtle, green turtle Chelonia mydas, and hawksbill turtle Eretmochelys imbricata) together with their potential prey types. Determining potential prey (including vegetation) isotopic signatures from across the region can contribute to the foraging isoscape in which the turtles are located, which in turn can assist assignation of turtles to specific geographic regions and key habitats. Pearson et al. (2017) highlighted the need to align stable isotope study effort with conservation targets, showing few studies have been carried out in the Indian Ocean region or on Critically Endangered species such as hawksbill turtles that are of relevance to this area of study. Finally, it may also be worth expanding the SIA to incorporate a third element, such as δ34S, which may better discriminate spatial structuring of foraging location, as was used to good effect in a study of green turtles in the Mediterranean Sea (Bradshaw et al., 2018) and loggerheads in the southeast United States (Tucker et al., 2014).

The authors would like to thank ESO’s field assistants who collected the olive ridley samples on Masirah Island (Ghasi Al Farsi, Juma Al Araimi and Juma Al Humaidi) and Asma Al Bulushi, ESO’s former Research & Conservation Coordinator who coordinated the samples export procedures. This research was completed with permits from the Environment Authority (formerly Ministry of Environment and Climate Affairs) No. 9/2013 and No. 14/2015 and exported under CITES export permit No. 34/2016