Green turtles (Chelonia mydas) nest on beaches along the coast of Pakistan throughout the year, with the peak nesting season between September and October (Firdous, 2001; Khanum et al., 2014). Daran, which is located in the Jiwani area on the western most coast of Pakistan, supports the highest number of nesting sea turtles (Shockley, 1949; Waqas et al., 2011; Moazzam et al., 2020). Since Daran is a relatively remote area, turtle nesting and nests are usually not disturbed except by predators such as feral dogs, jackals, and foxes which dig up eggs, and gulls which prey on hatchlings as they cross the beach to the water (Waqas et al., 2011). A major portion of Daran beach was extensively eroded by Cyclone Kyarr in late October of 2019, and the beach has not yet been re-established. No turtle nesting was reported from November 2019 to August 2020 (Moazzam & Hamera, 2020).

Daran is close to the border between Pakistan and Iran. Because of the porous nature of the border, a number of commodities are smuggled between the two countries. Fish is the usual product smuggled from Pakistan to Iran, whereas petroleum products (mainly diesel, petrol, grease, and bitumen) are smuggled from Iran to Pakistan. Iran produces 4.38 million barrels of oil per day and ranks 7th in the world for oil production. Pakistan produces only 0.08 million barrels per day of oil and ranks 53rd in the world (https://www.worldometers.info/oil/iran-oil/). Being an oil producing nation, the prices of petroleum products are low in Iran whereas the prices of fuel (diesel and petrol) are comparatively high in Pakistan. Because of the major disparity in the price of fuel between the two countries, smuggling of petroleum products occurs on a regular basis, with an estimated 1.2 million litres of petrol and diesel smuggled into Pakistan on a daily basis (Shahid, 2020). In the Jiwani area, this smuggling usually occurs in the creek system north of Daran (Figures 1-2). 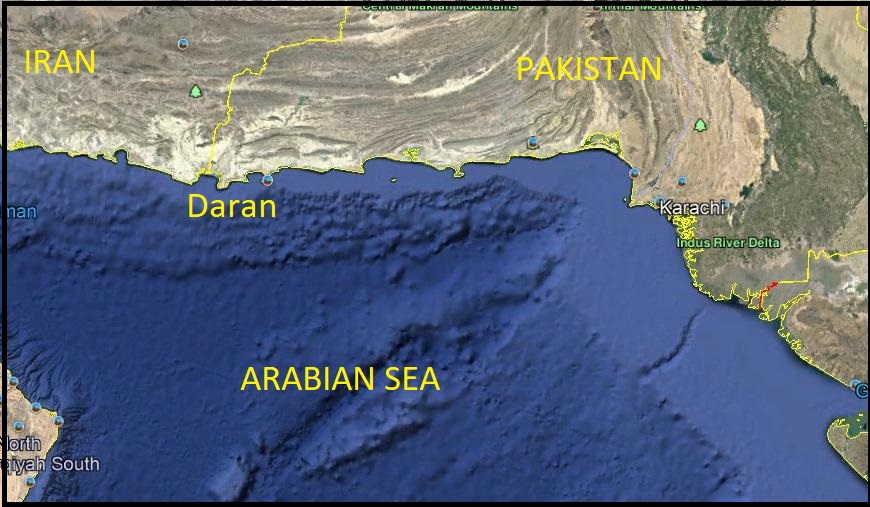 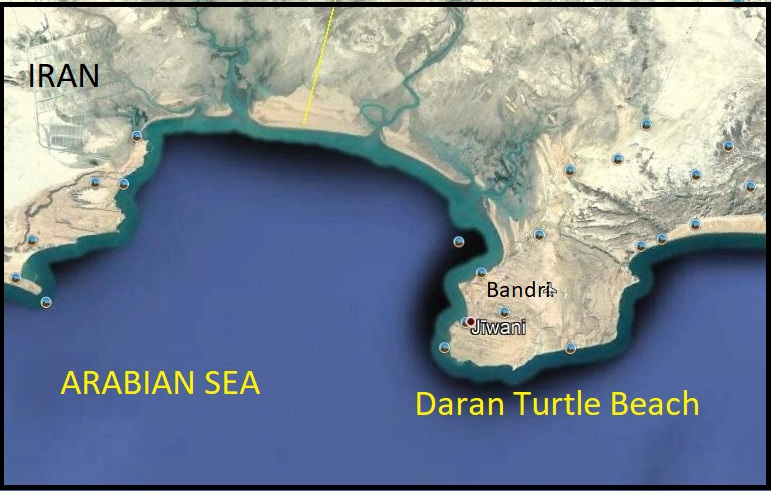 The Iranian oil is often moved illegally into Pakistan in tankers and jerry cans mounted on pickup trucks and motorcycles in full view of the border security forces, customs authorities, and provincial administration. Border security agencies and customs authorities, at times, take action against fuel smugglers which results in temporary stoppage of the illegal trade. However, those involved in the smuggling then look for alternate routes for continuation of their illicit trade. In October 2020, after authorities had taken action against the smuggling of fuel from Iran into Jiwani via the usual route, those involved in the trade brought oil into the country via a sea route to Daran Beach for a period of 35 days. The beach had not been previously used for such activities. There is no landing facility at Daran, and the oil was carried in jerry cans from Iran and offloaded on to the beach at high tides (Figures 3-4). Hundreds of people and ~50 pickup trucks were involved (Figure 5). This activity was mainly conducted during the daytime while low-level turtle nesting (~3 turtles per night at this time of year; Waqas et al., 2011) continued at night. 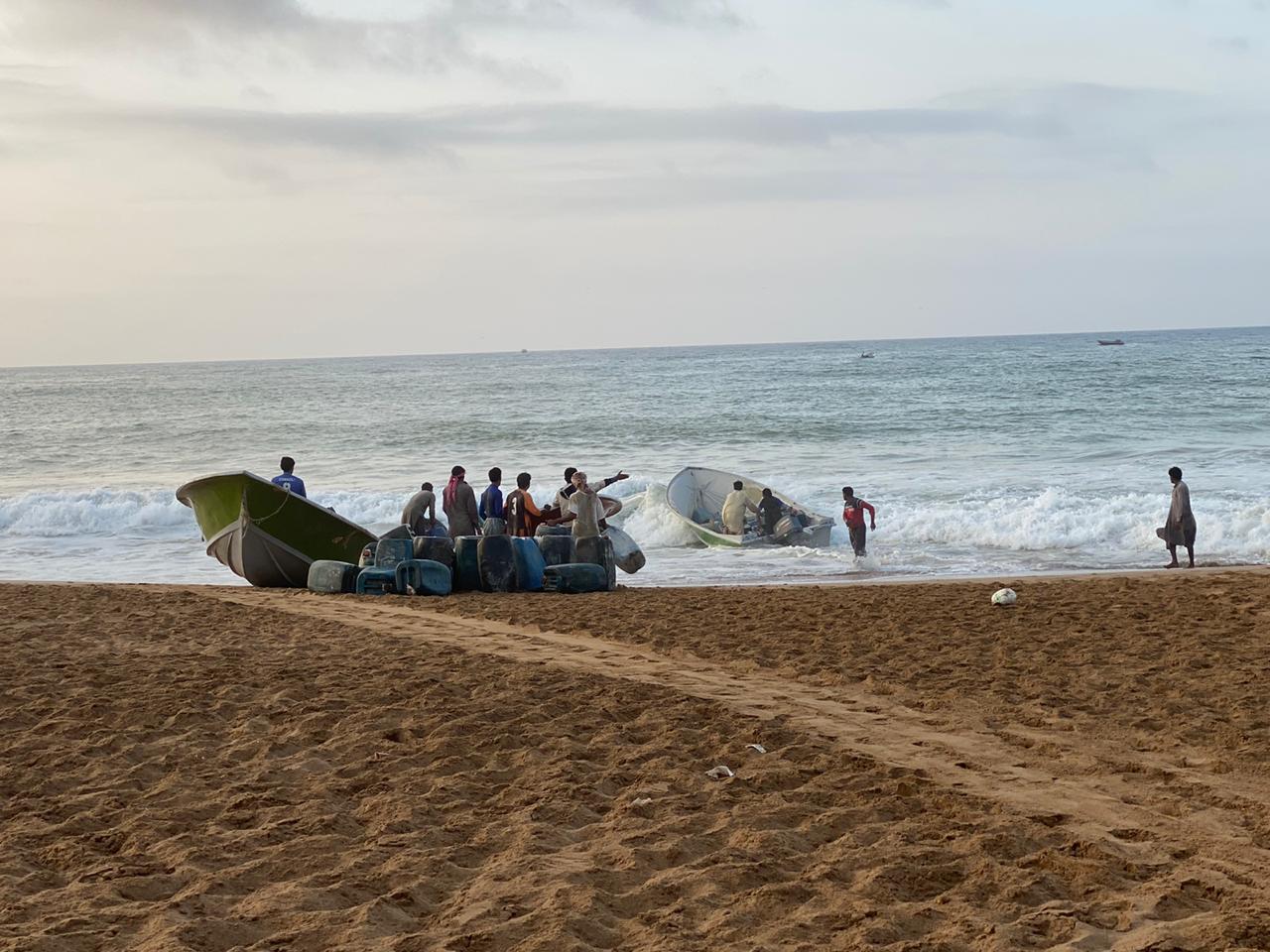 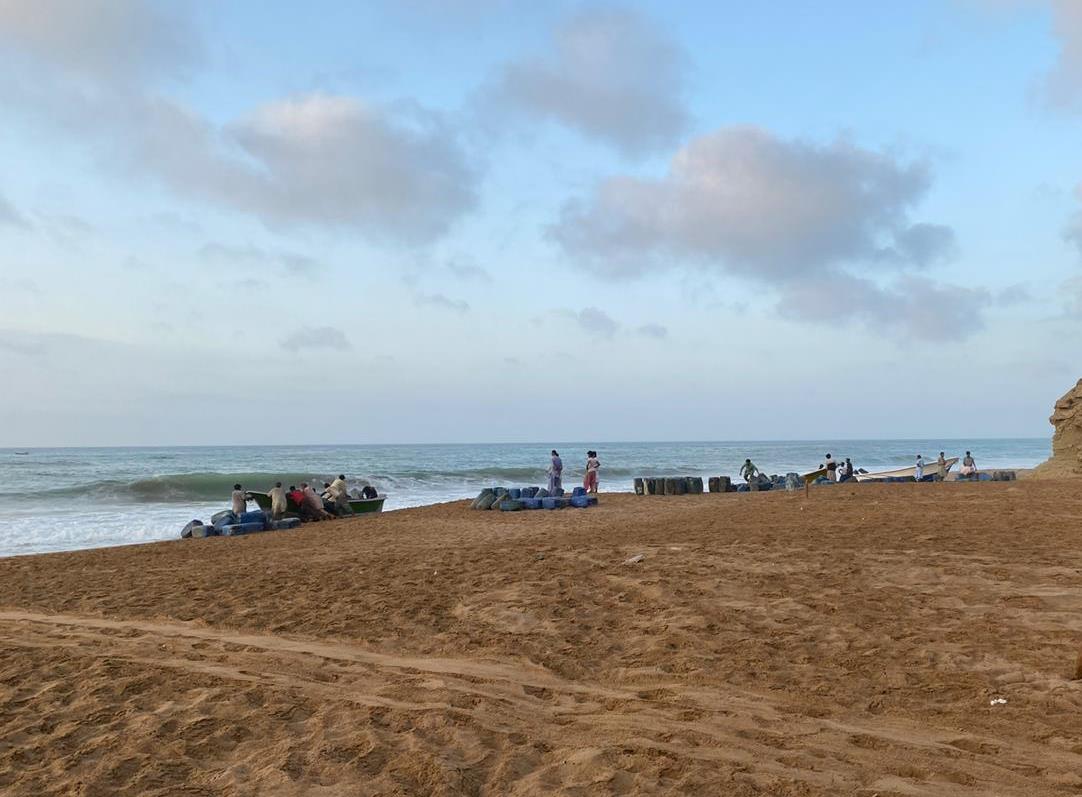 Figure 4. Jerry cans filled with fuel oil offloaded from small boats kept for shifting to pickup trucks in October 2020. Compaction of sand can be seen due to human traffic on Daran Turtle Beach (Photo credit: Anonymous) 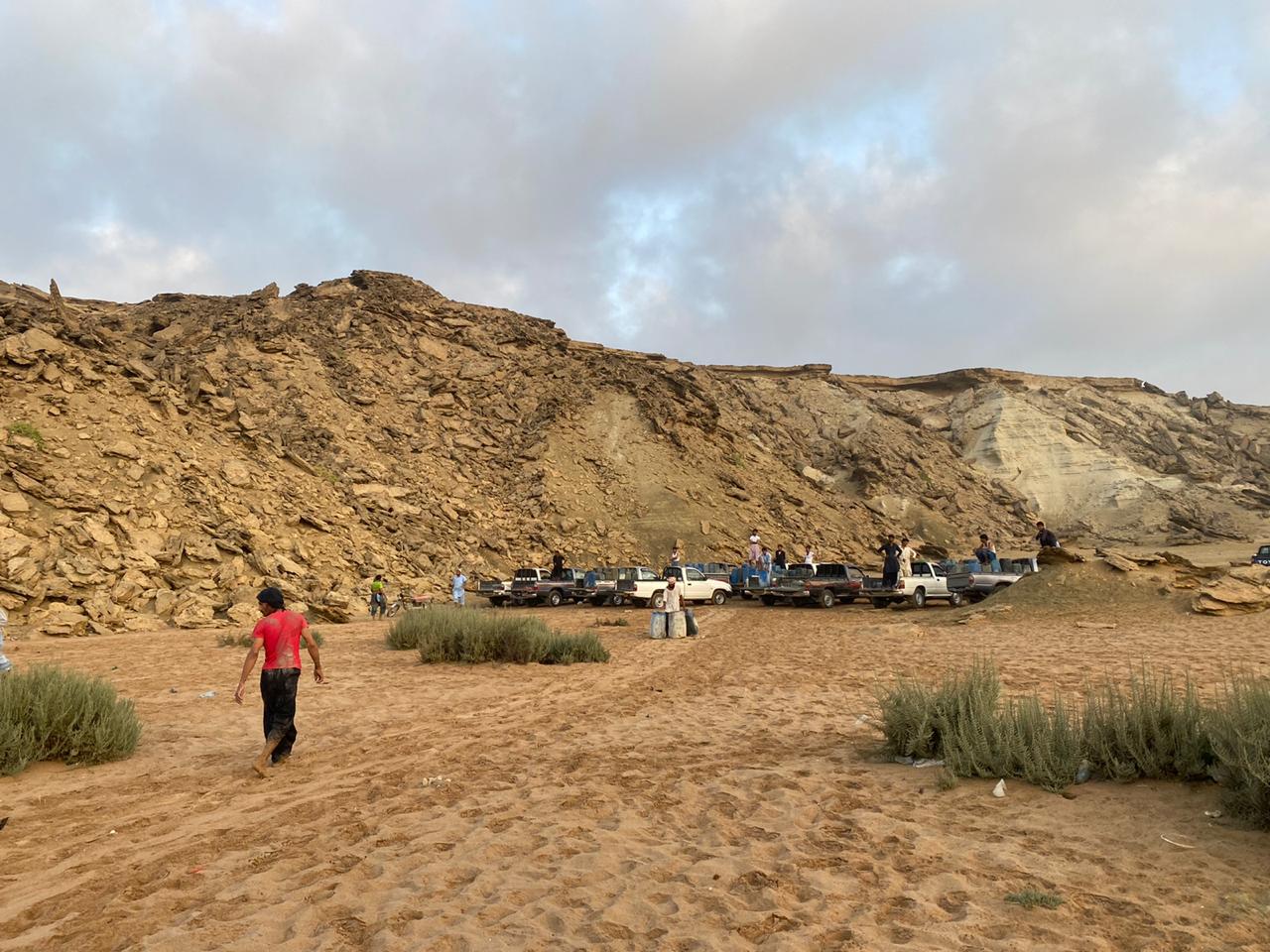 Interactions with the smugglers were avoided, so it was not possible to take many photographs and collect detailed data on the impacts of oil smuggling on sea turtles at Daran Beach. However, the following have been observed:

b) Trampling of turtle nests: Frequent movement of people carrying heavy jerry cans resulted in the caving in or collapse of some nests, killing all eggs and hatchlings. This was observed in December 2020, when smuggling activities had shifted to other locations.

c) Spillage of fuel: During transfer of fuel from fishing boats to pickup trucks, fuel could be seen spilling from jerry cans due to loose, improper, or damaged caps. Patches of fuel were also seen on sand during the period the beach was used for smuggling. A major part of the beach was contaminated with fuel, as evident from the stench of oil in the area. Turtles are vulnerable to oil on the nesting sites as females may refuse to nest on the beaches that are contaminated with fuel (Camacho et al., 2013). In addition, crossing of beaches contaminated with fuel could cause external oiling of the skin and carapace of nesting turtles.

d) Impact of fuel on embryos and hatchlings: Eggs exposed to oil or its products during the last half to last quarter of the incubation period have a significantly reduced hatching success and hatchling survival may also be affected. If hatchlings do survive to emerge from the nest, they tend to have developmental abnormalities (Wallace et al., 2020). Two green turtle hatchlings, that emerged from a nest in the area frequented by fuel smugglers in December 2020 and were found after depredation, show anomalous scute counts (Figures 6-7). Prior studies at nesting beaches in Pakistan examined hatching success but not hatchling scale counts (Firdous, 2001; Waqas et al., 2011) and future monitoring at nesting beaches could focus on this parameter as well to assess the potential impact of exposure to fuel.

e) The smuggling activity described here stopped in mid-November 2020 when smugglers shifted the operation back to their original site. However, Daran Beach was again used as a landing site from February to March 2021. It ceased again because of intensive wave action on Daran Beach. There is no possibility of the resumption of fuel smuggling at Daran Beach until the end of September 2021 because of rough sea conditions at this time of year.

Coastal communities in the area have asked the Government to keep a vigil and prevent illicit fuel smuggling through Daran Beach as it will have serious impacts on turtle nesting and other biodiversity of the area. They are also concerned because of the disturbance from movement of people, pickup trucks, and boats to fishing operations in the area. 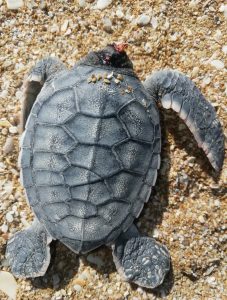 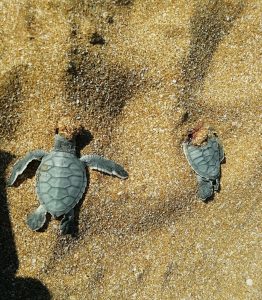 Figure 7. Green turtle hatchlings from Daran Beach with normal and anomalous scute patterns, December 2020. Sand can be seen contaminated with spilled fuel from jerry cans. Hatchling with normal scutes is on the right. (Photo credit: Anonymous)

Shahid, A. 2020. As Iranian petrol smuggling threatens to cause another shortage, PSO turns its head. https://profit.pakistantoday.com.pk/2020/10/17/as-iranian-petrol-smuggling-threatens-to-cause-another-shortage-pso-turns-its-head/. Accessed on June 10, 2021.