The United Arab Emirates (UAE) coastline and waters contain important sea turtle habitats (Pilcher et al., 2014), including sites listed as Ecologically and Biologically Significant Marine Areas (EBSAs, see www.cbd.int), and Wetlands of International Importance (http://www.ramsar.org/). Historically, these areas have been exploited for resources including sea turtles for their meat and eggs. Public interest in consuming sea turtles is perceived to have faded with the implementation of laws banning the use of all marine turtle products, including UAE Federal Law No. 23 in 1999 concerning the exploitation, protection and development of the living marine resources and Federal Law No. 24 in 1999 concerning the protection and development of the environment, and the designation of various marine protected areas. However, sea turtles in the UAE are still under immense pressure from anthropogenic threats, including climate change, coastal development, oil spills, agricultural run-off, boat strikes, bycatch, ghost fishing/entanglement, and ingestion of marine debris (Yaghmour et al., 2018a, 2021; Yaghmour, 2019, 2020; Stewart, 2020). Here, we present a case of a green sea turtle stranding near the city of Kalba, Sharjah, United Arab Emirates, that demonstrates impalement by spearfishing. 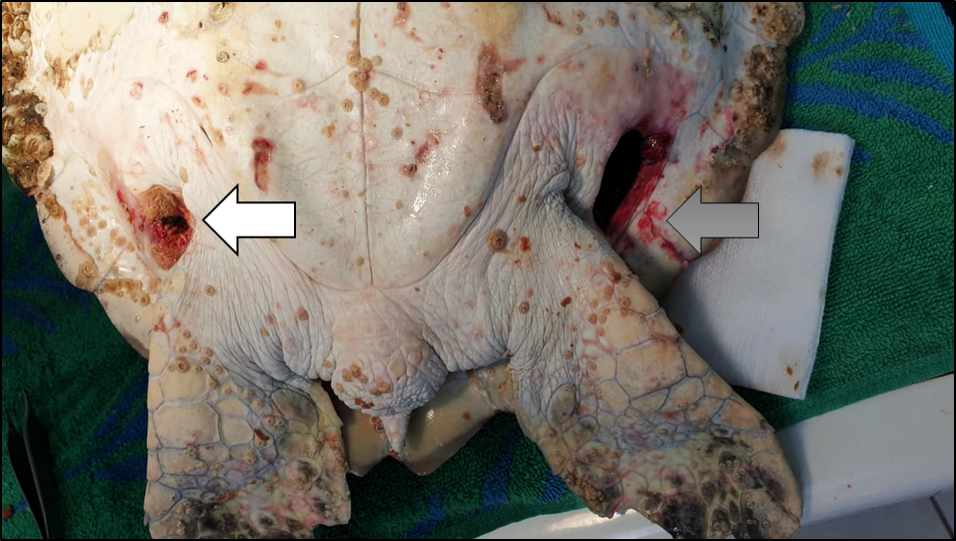 On the 30th October 2020, the turtle was admitted to the Dubai Falcon Hospital (DFH) by the staff of DTRP. The turtle was emaciated, weak in its responses, and weighed 9.2kg. The perforations in the pre-femoral spaces were determined to be horizontal entry and exit wounds resulting from impalement with a spearfishing arrow and were filled with debris and necrotic tissue. The plastron was concave and the skin surrounding the wounds was ragged, necrotic, and mildly elevated with erythema (i.e., redness) indicating septicemia. Radiography was performed to detect potential impaction and abnormalities (e.g., fractures, free air in the coelomic cavity, possible gastrointestinal stasis, foreign bodies such as hooks, or disease processes such as pneumonia), and revealed soft tissue opacity with air around the pre-femoral wounds, loss of detail in the caudal coelomic cavity (indicating the presence of fluid or other material), and impaction of the large intestine. After light sedation with Butomidor (Butorphanol, 0.3mg/kg), the right (smaller) entry wound was debrided, and its depth, distribution, and possible connection with the gastrointestinal tract assessed. The turtle received vitamins, subcutaneous fluids, antibiotics, and anti-inflammatory drugs, while further supportive care (including force feeding, warmth, breathing monitoring, dry box) was recommended. Further advanced diagnostic procedures were planned after initial stabilisation. Prognosis was deemed guarded to poor.

On the 1st November 2020, the turtle was found dead by the DTRP staff and subsequently transferred to Central Veterinary Research Laboratory (CVRL). Post-mortem examination revealed two wounds (20-25cm deep) in the pre-femoral fossa without connection to internal organs, oedema in the lungs and skeletal muscle tissue surrounding the entry and exit wounds, plastic marine debris in the gastrointestinal tract blocking the large bowel, and free fluid in the abdominal cavity. Cultures for parasites and fungi, and examination for parasite adults and eggs, were negative. Bacterial culture indicated the presence of Pseudomonas aeruginosa in multiple organs. The cause of death was established to be Pseudomonas septicemia and impaction of the middle jejunum with plastic debris.

The identification and documentation of anthropogenic threats is an essential component of conservation management plans and threat mitigation programs (Hazel & Gyuris, 2006; Denkinger et al., 2013). This case is the first published record of speargun impalement of a sea turtle from the United Arab Emirates and the wider Arabian region. The chronic inflammation and septicaemia, reduced overall condition, and amount of necrotic tissue around the wounds suggests that the impalement occurred several weeks prior to the turtle stranding, but it is impossible to determine if this injury was sustained within the proximity of the Alqurm Wa Lehhfaiiah Protected Area. It is also impossible to determine if the turtle was targeted or if it was shot accidentally. Fortunately, spearfishing of marine turtles is likely a rare occurrence globally with only a few previous records, mostly from the waters of Florida, USA (WDRB, 2019). Hence, spearfishing is not perceived as a prevalent threat to sea turtles regionally or globally, this case report demonstrates an additional regional hazard that should be considered in the development of holistic turtle conservation management strategies. Unfortunately, the gut impaction observed in this turtle is common both locally and globally. Previous studies found that 75-86% of green sea turtles sampled from the Gulf of Oman coast of the UAE ingested high quantities of marine debris items, which mostly consisted of plastics (Yaghmour et al., 2018b, 2021). No relationship between gut impaction and vulnerability to spearfishing or otherwise being the target of human fishing activities could be drawn from this case.

WDRB. 2019. Endangered sea turtle recovering in Florida after being shot in neck with spear. https://www.wdrb.com/news/national/endangered-sea-turtle-recovering-in-florida-after-being-shot-in-neck-with-spear/article_afc59618-d494-11e9-8dbc-ab2221feae1f.html. Published on September 11, 2019.