Of the seven species of sea turtle worldwide, four have extensive records in Malaysia: the green (Chelonia mydas), hawksbill (Eretmochelys imbricata), olive ridley (Lepidochelys olivacea), and leatherback (Dermochelys coriacea) turtle. The records of these turtles in Malaysia consist of primarily nesting (Hendrickson, 1958; Siow & Moll, 1982; Mortimer et al., 1993; Chan et al., 1999; Chan, 2006, 2013; Hamann et al., 2006; Mohd Salleh et al., 2012, 2018) and stranding data (Chan, 2006; FRI, 2020). Unfortunately, most of the strandings are of dead turtles, including 90.1% (n = 90/99) of the records from Malaysian waters in 2019 (FRI, 2020). The cause of mortality has been attributed to bycatch, illegal take, mortal injuries (including vessel strike), ingestion of plastics, exposure to oil slicks, and diseases such as fibropapillomatosis (Siow & Moll, 1982; Chan, 2006; Joseph et al., 2019). These are concerning as it indicates the insidious effect of anthropogenic activities on sea turtles in Malaysia.

On 8th December 2020, a female loggerhead turtle carcass with a wound at the top of the carapace was washed ashore at the west end of the beach of The Datai Langkawi Resort (6.426° N, 99.669° E), Langkawi, Malaysia (Figure 1). The carcass was severely decomposed (State 3 sensu López-Barrera et al., 2016), with the skin and scales peeled off, bloated carcass, and bad smell (Figure 2). The curved carapace width (CCW), curved carapace length (CCL), and the dimension of the wound were measured by the Datai Langkawi Resort (WC Lim) and Langkawi Fisheries Research Institute (SMA Syed Mahiyuddin). Photos were taken at all four sides (anterior, posterior, left and right side) and the facial scutes for the carcass (Figure 2a-e). The carcass measured 80cm (CCW) by 90cm (CCL). Based on the CCL, the specimen in this study was an adult female (Baptistotte, 2003, Casale et al., 2011; Ishihara & Kamezaki, 2011; Tucek et al., 2014; Patel et al., 2015). The open fracture (Figure 2b) on the carapace measured 16cm wide and 45cm long. The split wound was most likely from an anthropogenic source, suspected to be either vessel strike or human mishandling. 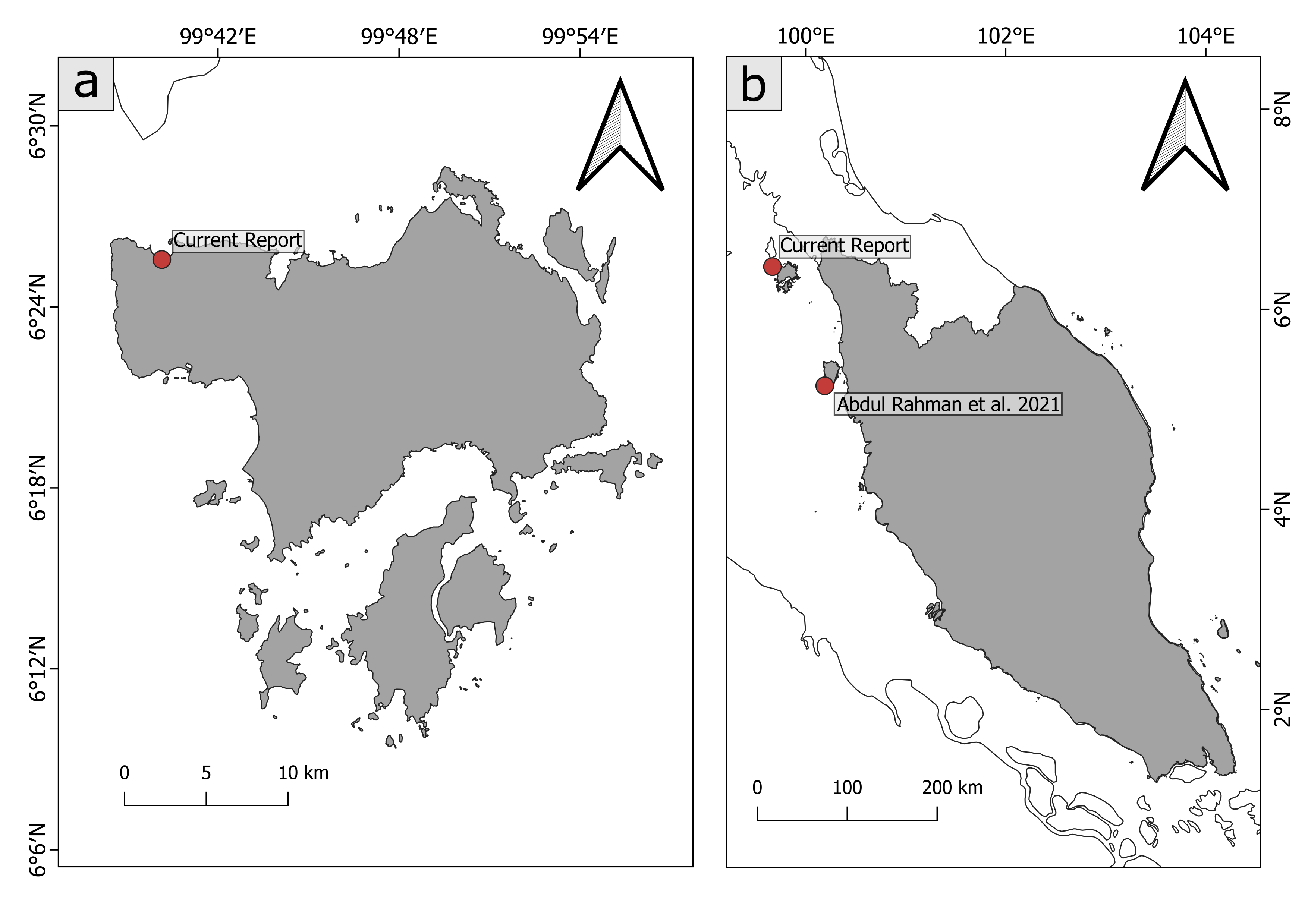 Figure 1. Map of (a) Langkawi and Teluk Datai where the carcass of loggerhead turtle was discovered; and (b) The two most recent records of loggerhead turtles in the Straits of Malacca (This study and Abdul Rahman et al. 2021). The grey area in the map represents the terrestrial domain of Malaysia. 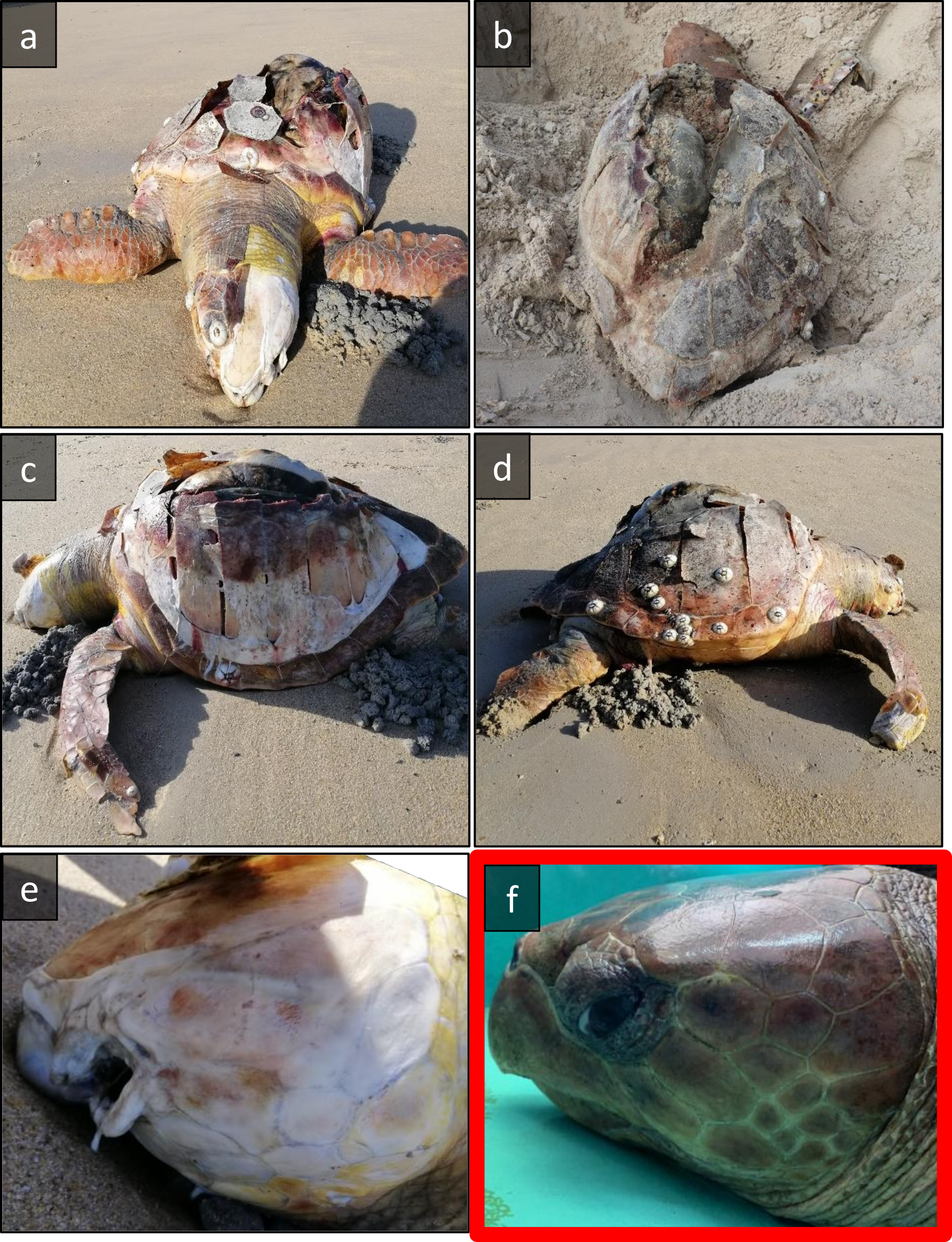 This incident is the first official record of a loggerhead sea turtle carcass washing ashore on the coast of Malaysia and one of few for the region. The distance between locations of the current report and Abdul Rahman et al. (2021) was approximately 144km. The records suggest that there are loggerhead turtles in the waters of Malaysia. Previous studies mentioned loggerhead turtles migrating to the South China Sea, possibly for foraging (Charuchinda et al., 2002; Kobayashi et al., 2011). However, the ecological importance of Malaysia for the loggerhead turtle population in this region is still unknown due to lack of records and study.

Based on the state of decomposition, the loggerhead turtle had died within the month prior and drifted ashore. The northern end of the Straits of Malacca passes through the Andaman Sea before going into the Eastern Indian Ocean. The Straits of Malacca experiences northeastern monsoon sea surface current (SSC) system in December, whereby the SSC experiences northerly movement from the southern to northern end of Straits of Malacca and ends in the eastern Indian Ocean. This is due to the water movement driven by the push from the strong monsoon current of South China Sea, pushed into the southern channel of the Straits of Malacca (Haditiar et al., 2016). Furthermore, there is an eddy of SSC between Langkawi Island and Tarutao Island during the monsoon period (Rizal et al., 2010; Syamsul Rizal et al., 2012; Isa et al., 2020). Hence, the period where the carcass was found (December) suggests that the turtles might met its demise at the northern islands of the Andamans (e.g., Tarutao Island) or was a migratory individual from the South China Sea.

The state of both loggerhead turtles raises concerns about the threats to sea turtles in Malaysian waters. The individual found in 2019 was entangled in a ghost net before it was rehabilitated and released by authorities (Abdul Rahman et al., 2021), while the individual reported in this study was possibly killed by human activity(s). Busy water ways, especially in the Straits of Malacca, and under-regulated maritime and fishery industries might pose serious threats to sea turtles and other marine megafauna (Balakrishnan & Varkkey, 2017; Wong & Yong, 2020) and require further investigation.

WHB was supported by Universiti Kebangsaan Malaysia grant, Young Lecturers Incentive Grant (GGPM-2021-056), in collaboration with The Datai Langkawi. We thank the Malaysian Department of Fisheries and Mohd Tamimi Ali Ahmad (Fisheries Research Institute Rantau Abang) for allowing the handling of the carcass and releasing the data for publication. All necessary permits for sampling and observational of the specimen were obtained from the competent authorities. The study is compliant with Convention on Biological Diversity and Nagoya protocols. The authors would like to express their sincere appreciation for Rushan Bin Abdul Rahman and Nicolas J. Pilcher PhD. for their feedback on an early draft of the manuscript.

Chan, E.H. 2013. A report on the first 16 years of a long-term marine turtle conservation project in Malaysia. Asian Journal of Conservation Biology 2: 129-135.

Wong, H.S. & C.C. Yong. 2020. Fisheries regulation: a review of the literature on input controls, the ecosystem, and enforcement in the straits of Malacca of Malaysia. Fisheries Research 230: 105682.