Marine megafauna such as sea turtles face multiple threats as they occupy different habitats at their breeding and foraging grounds (Lascelles et al., 2014; Read et al., 2014;), increasing their exposure to dangers across different life stages (Read et al., 2006; Dulvy et al., 2008; Wallace et al., 2010). Of these, ghost nets have emerged as a severe threat, affecting marine life disproportionately (Richardson et al., 2019a). Ghost nets are defined as discarded or accidentally abandoned fishing gear that are lost to the sea (Wilcox et al., 2014), and which continue to ‘fish’ indiscriminately thereafter. According to Wilcox et al. (2014), nearly 6.4 million tonnes of ghost nets make their way into the oceans annually. Richardson et al. (2019a) estimated that about 6% of all fishing nets, 9% of all traps, and 29% of all lines are lost every year. Ghost nets get carried over long distances across different oceans (Stelfox et al., 2014; Sayer & Williams, 2015), forming floating conglomerates and trapping large-bodied marine animals such as marine mammals, elasmobranchs, and sea turtles (Stelfox et al., 2015).

Sea turtle species such as the olive ridley (Lepidochelys olivacea) turtles are prone to entrapment in ghost nets due to their attraction to smaller organisms caught in such nets (Stelfox et al., 2016). For instance, olive ridleys are associated with flotsam in the eastern tropical Pacific Ocean (Pitman, 1990) and are known to bask at the sea surface, increasing their vulnerability to ghost nets (Pitman, 1993). Juveniles tend to utilise floating algal mats for basking, and could potentially be using floating ghost net conglomerates for the same (Boyle & Limpus, 2008). Where these overlap, olive ridleys are at great risk of being caught in ghost net conglomerates drifting in the sea. 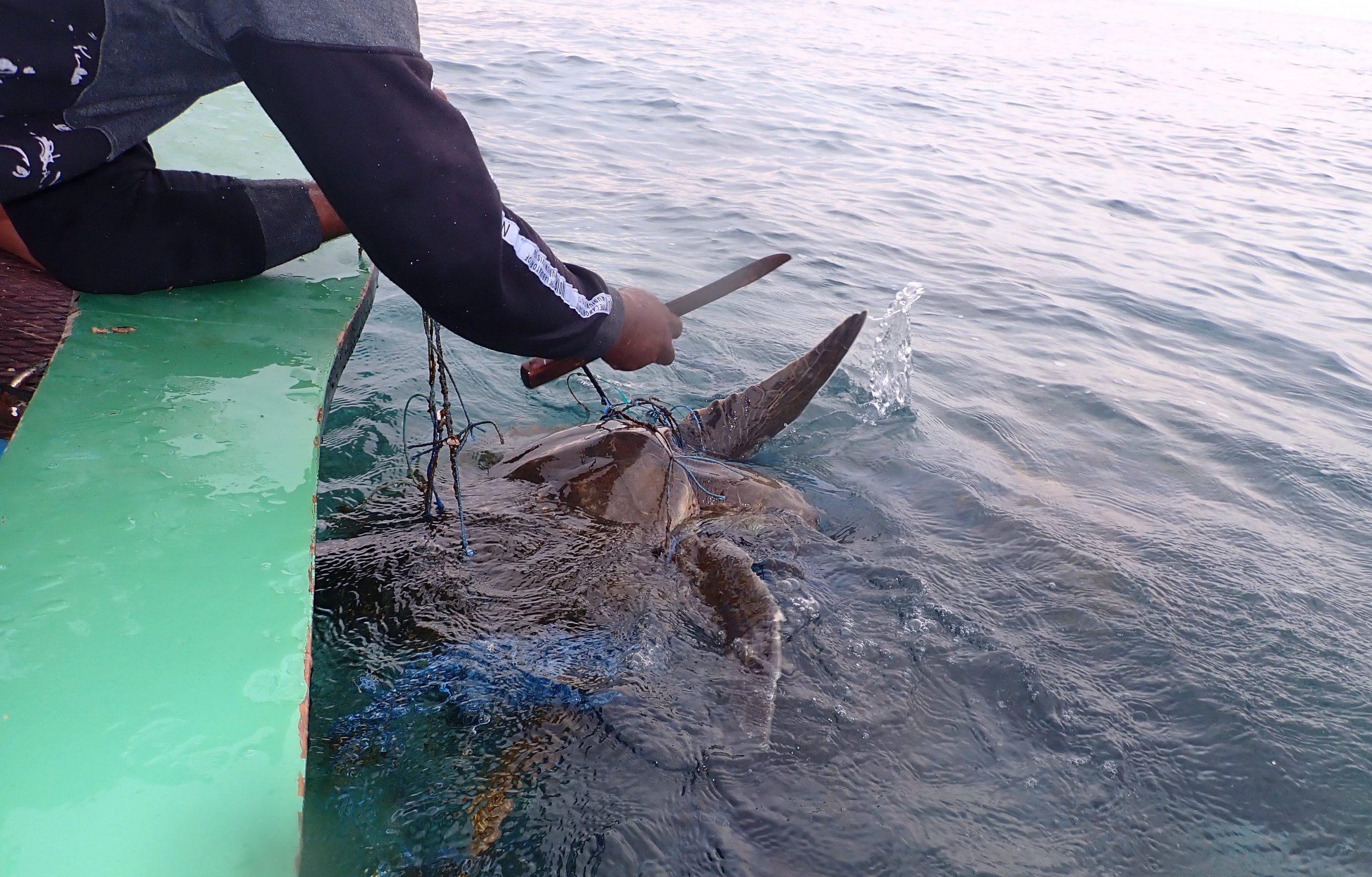 Figure 2. Olive ridley turtle was observed to be in distress after getting entangled in a floating ghost net in April 2021. (Photo credit: Nupur Kale)

In India, olive ridleys mass nest synchronously in Odisha (Pandav et al., 1994) and the Andaman and Nicobar Islands (Namboothri et al., 2015), and nest solitarily elsewhere along the Indian coastline and in the Lakshadweep islands. The Lakshadweep islands are an offshore territory located between 8º-12ºN and 71º-74ºE in the Arabian Sea that serve as breeding and feeding grounds for olive ridleys, with nesting observed on some islands (Tripathy et al., 2006). However, there is little information on the threats faced by olive ridleys, specifically the impact of their interactions with ghost nets in the islands.

In April 2019 and April 2021, we had two single-day chance encounters of three (two alive and one dead) and one (alive) olive ridley turtles respectively, trapped in ghost net conglomerates in the lagoon at Kavaratti Is. (Figure 1). We recorded the events photographically while freeing the turtles from the nets (Figure 2). We were unable to take morphometric measurements or determine the sex of the turtles as their removal from the water was not feasible. Based on the photographs, we estimated the curved carapace length (CCL) of the entangled turtles to be between 40-60cm. There were no signs of external injuries on their carapace, plastron and neck; however, we noticed some lacerations on the flippers during the removal, probably caused by the nets. After release, the live turtles swam away without apparent injury or fatigue.

There has been an increase in marine litter found on the beaches and in the lagoons of the Lakshadweep Islands (Kaladharan & Anasukoya, 2020). In 2017, Kaladharan et al. (2017) surveyed ten islands in the Archipelago, recording an average of 1.61g/m2 of litter on the beach, chiefly nylon threads and pieces of fishing net. In 2020, Kaviarasan et al. (2020) reported that nearly 45% of marine debris on three remote beaches of the Lakshadweep was discarded fishing gear. Even though tuna fishing using pole and line gear is the predominant form of fisheries in the Lakshadweep islands, nets and long-lines are also used to catch bait and lagoon fishes, and sharks respectively. Moreover, the commonly
practiced fisheries in the Indian Ocean region and India are trawling, gill netting and seine nets, all of which rely heavily on different types of nets (Stelfox et al., 2014). Therefore, while it is likely that some nets in ghost net conglomerates observed in the Lakshadweep islands may have originated from mainland India, the diversity of nets used at local and regional scales make it difficult to ascertain the exact origins of the nets (Stelfox et al., 2019).

Ghost nets pose a significant threat to all marine life. It is imperative that activities that improve net disposal and reduce plastic pollution and other forms of waste from the waters at both regional and global scales are implemented. Tackling this issue will require a multi-faceted approach combining research, awareness, and preventive action. It is essential to determine the type of gear that is lost and find ways to minimise its disposal through dialogue with fishers and fisher unions (Stelfox et al., 2019). Other measures include engaging with coastal enforcement agencies, fishers and other marine vessels in activities, and engaging them in rescue of sea turtles and other marine megafauna from ghost net entanglements. This will help in understanding how the distribution of floating nets along the coast is correlated to fishing practices at regional scales. While regular cleaning up of beaches, lagoons and retrieval of nets is important to tackle the threat of ghost nets, innovative measures such as regular monitoring and removal, incentivising fishers to practice recycling or reusing damaged nets and encouraging proper disposal of the gear in waste facilities on shore or ports will considerably reduce the threat of ghost nets (Richardson et al., 2019a, b; Stelfox et al., 2019). Fishers play a pivotal role in any initiative that aims to mitigate the threats of ghost nets. Therefore, creating awareness amongst the coastal communities and initiating collaborative efforts will drive a change in behaviour towards implementing sustainable practices in ghost net reduction and removal.

We would like to thank the Department of Environment and Forest, Lakshadweep Administration, for granting us permits to work in the Lakshadweep Islands.

Kaladharan, P. & A. Ashiyoda. 2020. Plastic pollution in the islands of Laccadive Archipelago and its possible impact on the atoll ecosystem. Journal of the Marine Biological Association of India 62: 119-122.

Tiwari, A. 2021. Hunting our seas: How ‘ghost nets’ threaten marine life and human beings. Published on 24th July 2021. https://timesofindia.indiatimes.com/haunting-our-seas-how-ghost-nets-threaten-marine-life-and-humanbeings/articleshow/84686016.cms. Accessed on May 13, 2022.

Tripathy, B., K. Shanker & B.C. Choudhury. 2006. The status of sea turtles and their habitats in the Lakshadweep Archipelago, India. Journal of the Bombay Natural History Society 103: 33-43.