The beaches on the east coast of Middle Andaman have long been known as important nesting sites for olive ridley turtles in the Andaman and Nicobar Islands. Of particular importance are the beaches in the Cuthbert Bay Wildlife Sanctuary, Middle Andaman, where olive ridley turtles have been reported to nest in fairly large numbers from November to April, with a peak between January and March (Fatima, 2011). In 1994, Satish Bhaskar, one of the pioneering sea turtle researchers of India, reported an “arribada-type” phenomenon of olive ridley nesting on the beaches of Cuthbert Bay with 100-200 nests laid on some nights (Bhaskar, 1994). Data collected by the local forest department indicated that more than 50% of the nests for the 1990-91 and 1991-92 seasons were laid in short spurts of 2-3 days (see Table 1; Namboothri et al., 2012). Fatima et al. (2011) collated information on sea turtle nesting in Cuthbert Bay prior to and immediately after the December 2004 earthquake and tsunami, and determined there was a sharp decline in nesting in the two years following the tsunami. During this period, there is no indication of synchronized nesting.

A New Olive Ridley Mass-Nesting Site for the Indian Ocean?

Recently, more than 5,000 olive ridley nests were laid on 18th and 19th of January 2014 on Harguna Beach, a short stretch of beach about 6 km north of the Betapur (Dhani) Nallah Beach (see Figure 1) (EOIC, 2014). Forest Department personnel stated that mass-nesting has been observed at the beach since 2012, with more than 1,000 turtle nests recorded on the beaches of Cuthbert Bay from January 15-19, 2013. Though the intensity of nesting is not comparable to the nesting abundance observed at mass-nesting beaches in Odisha (> 100,000/year), there is clearly a pattern of synchronised nesting emergence.

Following reports in the media, the authors visited Cuthbert Bay Wildlife Sanctuary on 7-8th February 2014 to conduct a rapid survey of the nesting sites, examine the hatcheries, and to offer a training programme for field staff of the forest department, Mayabunder Division. The department monitors olive ridley nesting along the east coast of the Middle and North Andaman Islands (at Cuthbert Bay, Karmatang, Ramnagar, Kalipur, Lamiya Bay and Ross and Smith Island) and at Harguna Beach. Interactions with the forest department indicates high nest depredation due to feral dogs and pigs. Hence, sporadic nests on the main Cuthbert Bay Sanctuary nesting beach are shifted to permanent hatcheries set up at regular intervals on the beach. The mass-nesting site at Harguna Beach is a relatively remote and narrow beach and the entire beach is fenced off to reduce nest predation by feral dogs and human poaching of turtles and eggs. Many of the nests are laid below the high-tide level and are relocated into a temporary in-situ hatchery on the beach.

A workshop and training programme was conducted for about 30 frontline staff of the Middle and North Andaman ranges on sea turtle biology and hatchery management practices. This was followed by an interactive session where many of the staff discussed and clarified issues pertaining to sea turtle monitoring and hatchery management. Prospects of initiating a tagging programme were discussed along with protocols for monitoring mass-nesting.

Following the training programme, we provided a brief list of recommendations for the sea turtle monitoring programme at Cuthbert Bay. We plan to initiate collaborative monitoring of the mass-nesting site with the Forest Department of Andaman and Nicobar Islands in the upcoming season. We also plan to provide training for monitoring and management, and posters and manuals are being developed towards this end. The recommendations were as follows: 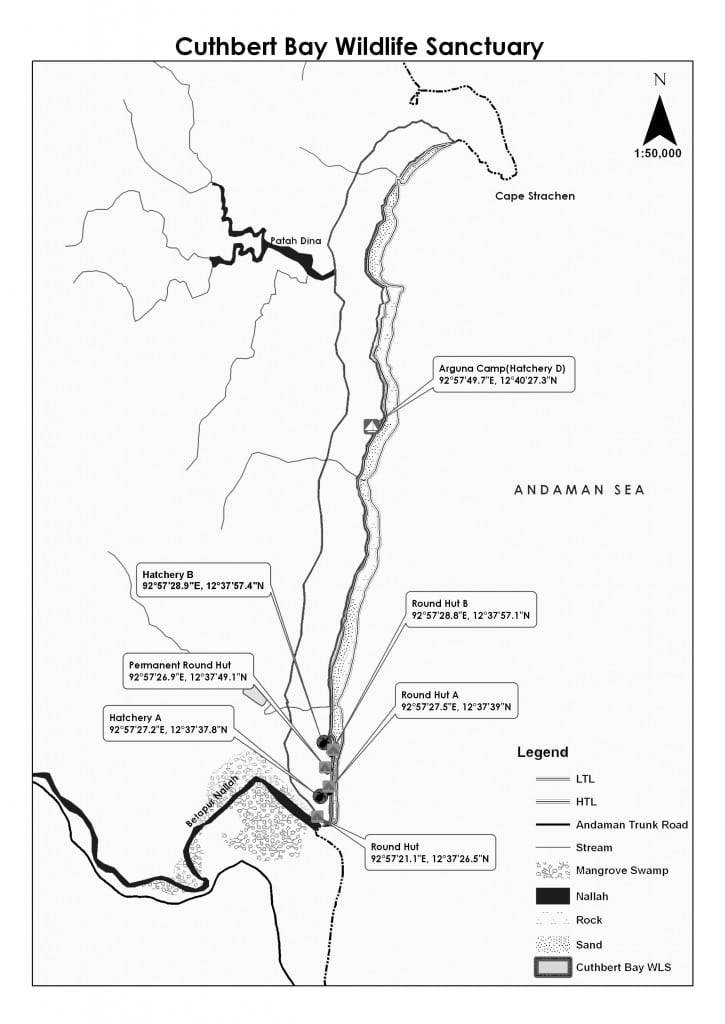 Figure 1. Map of the Cuthbert Bay Wildlife Sanctuary indicating the locations of the hatcheries and staff camps along the beach and the mass-nesting site at (Harguna Beach). Source: Forest Department, Middle Andaman.